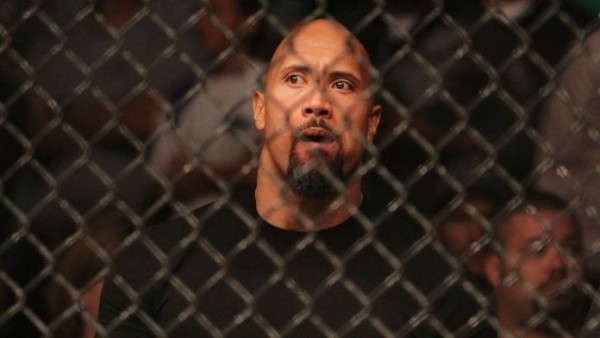 Dwayne "The Rock" Johnson, the former WWE superstar who became one of the top-billed Hollywood movie stars, will bestow the BMF belt on the main-event winner at UFC 244 on Saturday night at Madison Square Garden.

Johnson, who also made his WWE debut inside Madison Square Garden in November 1996, announced that he will be in attendance at the big event during an Instagram Live video with UFC president Dana White. Johnson confirmed that he will award the "BMF" championship belt around the waist of the winner in the main event showdown between Nate Diaz and Jorge Masvidal.

Masvidal, a native of South Florida, was the first to ask The Rock on social media if he could put the belt on him if he won. Johnson played football at the University of Miami before rising to fame in WWE. In a recent interview about the coming fight he praised the fighter saying the "Masvidal's legend is legit, that is a bad dude coming out of south Florida."

Doing all I can to make this fight. If I can and you win, I’ll put the belt around your waist at MSG - consider it done. Already shaping up to be one of the biggest and most electrifying fights in @ufc history. Can’t wait. @GamebredFighter @NateDiaz209 #respect #BMF #UFC244 ️ https://t.co/nVTIeBtkgv — Dwayne Johnson (@TheRock) September 9, 2019

The "Rock" praised Diaz as well saying "with Diaz, you're not going to knock him out and you're not going to submit him - "he'd rather die before he submits." He added that he is "such a fan of MMA that I have too much respect for the guys and girls who put it all on the line to say who's going to win."

The professional-wrestler-turned-actor also expressed his excitement. "I learned a long time ago in terms of combat sports, in boxing and in MMA, especially at this level with two guys who are so skilled and respected in Masvidal and Diaz, that I just want a good fight."

UFC 244 is sure to be a star-studded octagon bout at the Madison Square. It is perhaps the biggest card fight of the year. "That place is gonna be rocking, it's gonna be electrifying. I can't wait to get in there, man," Johnson told reporters.

The BMF championship belt is especially made and custom-built for this fight. It features two grizzled veterans known for their no-nonsense styles inside and outside the Octagon. Johnson was asked to comment about the new bealt design. He said, "This addition to the company and the brand and to the sport, this BMF belt, I think it's brilliant. It's so smart and it's just fun, man."

With Johnson confirming his hand to proclaim the winner, he is adding a new thrill by announcing a special surprise for UFC fans on Friday's press conference. The multi-time WWE champion and movie star revealed that he had "something I wanted to tell the UFC fans and MMA community first." Johnson is represented by Endeavor, the same agency that also owns the UFC.

The "Rock" is currently known as the "The Most Electrifying Man In Sports Entertainment" and he has graced many MMA events through guest appearances. Nevertheless, the UFC 244 at the Madison Square Garden is 'the big event' people are looking forward to see him in.