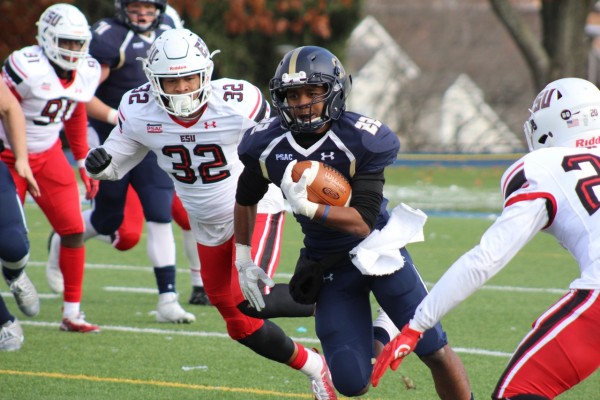 All hail to Ariel Orona - the first female Californian who ever made a touchdown pass! The 17-year-old wide receiver from Silver Creek High School football team in San Jose, California made a noisy buzz last week that made her school very proud.

On October 11, Orona made history for the Silver Creek Raiders who were up against Westmont High. In the 6th game of the season, the running back tossed the ball to Orona and the famed wide receiver threw it to the quarterback Ricardo Anaya to complete a 23-yard pass. The pass then called the shots for a touchdown.

"I was excited," Orona had told the reporters. She shares that she has been practicig for the past three weeks only for that particular throw and while she was anxious for it to happen, the actual success in throwing the touchdown made her "emotional."

Orona was a back-up quarterback previously for the junior varsity team but she never threw a touchdown. The famous pass earned the respect of her teammates though. Her next goal is to make the touchdown herself as a wide receiver.

Orona also hopes to inspire young girls to play football. She added, "For all the younger girls, if you have a dream go for it. No matter how crazy it seems. Anything is possible."

Silver Creek High Football Head Coach Aaron Noriega said he was surprised, "I was shocked but I was amazed, hey it worked." Amidst the team's excitement Noriega added, "They came and said, 'Hey, I think we went down in history!' We? You mean she! She went down in history."

Noriega agreed with Orona's statement about going for the dream. He said, "Chase your dreams, you know? If that's what you want to do, play football. Never tell a child that they can't play something."

Because of her name, the school named the play "The Little Mermaid." She has then become an instant celebrity at her school. "Pretty dope," a Silver Creek student, Kalrisa Arguta described the touchdown record. Some boys at the school expressed that the game was great for the school.

This is the first time in the Silver Creek Raider's football history of 50 years. Orona is also the 4th female in the school's history to play football. And many are applauding her in social media as the first female to make a touchdown pass in the entire state of California.

There are only a few females who really make a name in football as it is a male-dominated contact sport. However, many young girls are now reaching out to Orona after the game. She said that they are getting interested to train and perhaps be the next star on the field.

There is no gender discrimination in this sport as to any sport in general. The only challenge is how to be physically fit and psychologically ready to beat the hurdles.

The team's latest overall is 4-3 with currently a 674 statewide ranking. A lot are rooting for the team to move up and are thanking Orona for the excellent performance in the most recent game.