‘The Legend Of Zelda: Breath Of The Wild’ New DLC Revealed; Clue Board Game Announced [VIDEO]

"The Legend of Zelda: Breath of the Wild" finally reveals the first paid DLC, which adds new features like a new Cave of Trials. It also includes several new goodies for players to goof around with like the Korok Mask.

"The Legend Of Zelda: Breath Of The Wild" Adds New Features

The Trail of the Sword will start when Link enters into it without any equipment, and he will have to work his way through 45 rooms. For players who will complete the Cave of Trials, they can now awaken the true power of the Master Sword.

"Breath Of The Wild" Hard Mode Increases Rank Of Enemies

For the new Hard Mode, it will increase the rank of the enemies, which will make it more challenging than the first version of "Breath of the Wild." Players will have to take care of the enemies quickly because these monsters will slowly recover their health. They will also notice Link from longer distances, and much more other abilities added, The Guardian reported.

Another addition to the "Breath of the Wild" is the Hero's Path Mode, which was the new method to interact with the map. It will record the path the player would take on their map, which is up to 200 hours. The real purpose of this feature is to assist players to discover the areas that have not been to yet.

"Breath Of The Wild" Equipment Additions

The first DLC pack also added some new equipment for players to use. These items are the Travel Medallion for quick travel, the Korok Mask to locate and find Koroks, and the Themed Equipment, which included the Midna, Tingle, Phantom, and Majora's Mask items.

"The Legend Of Zelda" Gets New Clue Board Game

In other "Zelda" news, the franchise now has a new Clue board game, which will be released in June. This new board game will have six personality cards, which includes Link, Zelda, and Impa. It will also have six metal hero movers, 16 boss encounter cards, and the board is the land of Hyrule that includes Zora's Domain, the Lost Woods, and many more, IGN reported.

Check out "The Legend of Zelda: Breath of the Wild" Nintendo Switch Accolades Trailer video below:

Tags The Legend of Zelda, Breath of the Wild, Cave Of Trials, Hard Mode, Trail Of The Sword, Clue Board Game, Hero's Path
© 2017 University Herald, All rights reserved. Do not reproduce without permission.

‘The Legend Of Zelda: Breath Of The Wild’ Outsells Nintendo Switch; Fan-Made Game ...

Angry Guardians Make Perfect Weapons In ‘The Legend Of Zelda: Breath Of The Wild’ [...

‘The Legend Of Zelda: Breath Of The Wild” Sells More Copies Than Nintendo Switch [...

'The Legend of Zelda: Breath of the Wild' Release Date: Nintendo's Latest Zelda Hints A ... 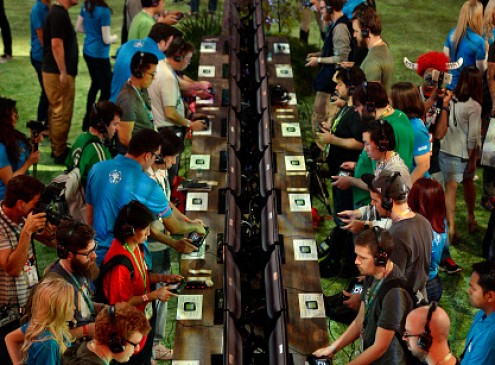