The public is already used to seeing Scarlett Johansson in an action-packed movie. The actress' Black Widow portrayal in Marvel Cinematic Universe films is probably one of her most memorable role to date.

Johansson's Major Motoko Kusanagi role is, in some way, similar to Black Widow. Both require the actress to undergo intense training for her stunts, and both characters are badass females who are bent on stopping criminals and terrorists.

Johansson described the cyborg Motoko as a "tactical" and "incredibly efficient" machine. Despite these, she can be destroyed and is not blessed with superpowers. This is why Motoko "fights in a different way" but still in a militaristic capacity, Film-News reported.

The A-list movie star teased that she had to carry a huge weapon prop and run around with it while filming "Ghost in the Shell." Director Rupert Sanders confirmed that the film will showcase computer generated imagery like what was expected by fans, but there are more scenes that are practical and were built by a prop company, Weta Workshop.

Weta also released two pricey statues for "Ghost in the Shell." One is a robot geisha with interchangeable heads, while the second one is the Major standing ferocious on a base that lights up. Both statues are priced at $449 each and can be ordered here.

Sanders shared that they used "exploding animatronic geisha heads" and building rooftops in the movie. They want to convey a "feeling of authenticity and reality, rather than doing it in a green vacuum."

Motoko is technically a sentient robot, so she's capable of feeling human emotions. Johansson explained to Empire that the character is "living a unique experience" as someone who has an inkling of what she was, but is caught in "who she is now, and the person that she feels she is." Basically, Motoko has three sides: the ego, the superego and the id.

Two new gorgeous posters have been unveiled for "Ghost in the Shell." One shows Johansson in said costume and one featured a disturbing geisha robot. Check out the images below.

"Ghost in the Shell" also stars Michael Pitt as the villain Kuze, Juliette Binoche, Pilou Asbaek, Takeshi Kitano and Chin Han, among others. The film bows in theaters on March 31, 2017.

GHOST IN THE SHELL @IMAX posters are absolutely gorgeous! pic.twitter.com/65M0W67BT8 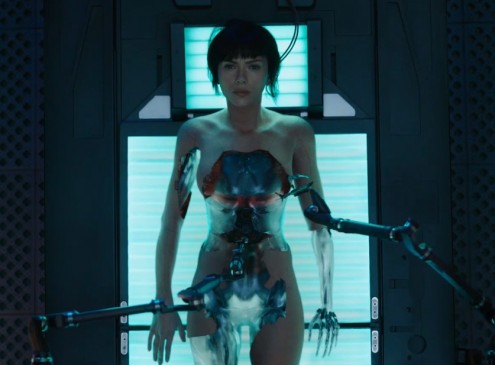