Samsung is expanding its portfolio again under the Galaxy J series after hinting the release of Galaxy J7 (2017) handset. Previously, the handset surfaced on benchmarking website GFXbench carrying the model number SM-J727A. However, on the latest filing in the same benchmarking site, another smartphone bearing the SM-J727VL was unveiled, which could be the U.S. variant of the Galaxy J7 (2017) phone.

According to the GFXBench listing of the SM-S727VL handset, it will feature a 5.5-inch display with 720 x 1280 HD resolution. Other key specs and camera sensors remained the same with the earlier listing for SM-J727A, besides the difference of the two benchmark tests in the mobile chipset and operating system, Phone Arena reported.

The listing for SM-J727VL points to a quad-core Qualcomm Snapdragon 425 processor clocked at 1.4 GHz. It will also sport an Adreno 308 GPU. Earlier, the international model SM-J727A is expected to sport an octa-core Exynos 7870 chipset clocked at 1.5Ghz, alongside the Mali-T830 GPU.

Both versions of the Galaxy J7 (2017) smartphone will receive a 2GB of RAM and 16GB of internal storage onboard, which can be further expanded via a microSD card slot. On the software front, the SM-J727VL version packs an Android 6.0.1 Marshmallow, which is a lower OS version against the Android 7.0 Nougat inside the U.S. variant SM-J727VL. With this, it will allow users to open two apps simultaneously.

In its optics department, the Galaxy J7 (2017) is expected to feature an 8-megapixel front-facing camera, as well as a 5-megapixel front-snapper, Phone Radar has learned. Both cameras are integrated with Full HD resolution for video recording. As improved features, the phone's rear camera may have added features like autofocus, face detection and touch focus.

The said smartphone has already been certified by FCC database, suggesting a near release in the future. According to reports, the smartphone is expected to be sold in U.S. carriers AT&T, US cellular and Verizon Wireless. To be more specific, the "VL" letters in the model number could signify this variant heading to Verizon.

It will be likely for customers to witness the Galaxy J7 (2017) unveiling at the upcoming MWC 2017 event during Samsung's press event. 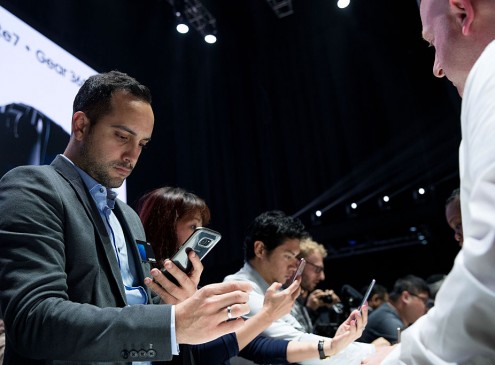