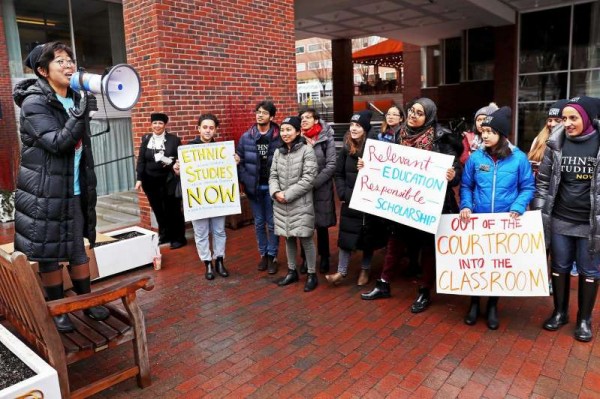 More than 50 students from Harvard staged a sit-in at the University Hall earlier this month. They raised placards while chanting: "Ethnic studies! When are we going to want that? Now"

They also wanted justice for Lorgia García Peña, a professor for the Ethnic Studies department who had been refused tenure at the university recently.

Peña, an associate professor of romance languages and literature, was not only up for tenure but according to many students she was also considered the best choice to lead the initiatives of Harvard's Ethnic Studies.

After a 50-year drive, an Ethnic Studies department is still absent from the Ivy League school. Peña is a leading Dominican research specialist, which also makes Harvard a leading school in this area. And yet her tenure was denied by the university.

While students and faculty signed an open letter criticizing Harvard's decision, over 200 of the brightest American scholars in Ethnic Studies also drew up a letter condemning Peña's problem imposed by the university last week. They also acknowledged that in the academe, her situation is not an exception. The dilemma was summed up by noted women and African American authors' bell hooks, the revered professor in residence at Berea University.

Not only have the programs continued to be troubled by the lack of credibility given to Ethnic Studies, but also the professors who produced and preserved them. According to the National Center for Education Statistics, in the fall of 2017, fewer than 12% of the 1.5 million university professors in the US are women of color.

Dr. Olivia Perlow, Associate Professor of Sociology, African and African American Studies, and Women and Gender Studies at Northeastern Illinois University, studies the role of BIPOC in today's academic world, particularly women. She said that as a faculty, there are "a whole host of challenges" facing BIPOC women.

Perlow emphasized that Ethnic Studies are not taken seriously because of the same indifference. Referring to the fact that schools such as Harvard, founded before 1865, have benefited from forced labor, she states: "Why would we expect the academy to be different when the academy itself has been a hotbed of racist, sexist, theorizing study and practices since its inception, and particularly for elite institutions like Harvard, which have literally been made possible by slave labor?".

A senior at Harvard, Rosa Vazquez, who helped organize the recent protests, told the Boston Globe that four professors who teach Ethnic Studies have also been exited from the university recently. On the other hand, the closed system of how tenure is awarded at Harvard has left students feeling uncomfortable according to Harvard alum Jeannie Park.

With her 2016 book, The Borders of Dominicanidad: Gender, Nations and Records of Contradictions, Peña is well-respected in the area of Latina studies. She has received many prestigious awards, including the Gloria E. Anzaldúa Book Prize for National Women's Studies Association and the 2016 LASA Latino Studies Book Award.

Until Harvard makes its decision, several academics across the country wrote letters calling for her tenure. By its very nature, Ethnic Studies was created to defeat the hold of white supremacy in educating long cast-out minority students from the system. Faculty like Peña would obtain her rightful permanent place in an academic institution like Harvard if the explanation for this institutional pressure was recognized.