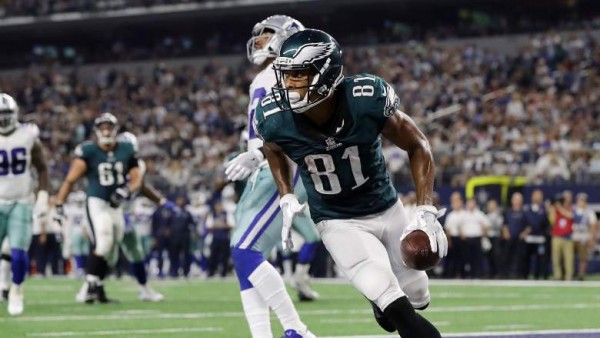 The Philadelphia Eagles just officially signed wide receiver Jordan Matthews again. Many media outfits announced on Tuesday that there was an imminent agreement to take Matthews back to the nest. After the bye week, Matthews, who has been rumored to a Philadelphia reunion for several months, rejoined the team. Jake Schwartz first announced the move and Ian Rapoport later confirmed it.

The Eagles will embark on a third stint with the former second-round draft pick. For parts of four seasons, Matthews has made 245 catches for 2,973 yards and 21 touchdowns.

The Eagles also fuelled speculation by releasing safety Andrew Sendejo and placing receiver DeSean Jackson on injured reserve to make two roster spots open. The San Francisco 49ers cut Matthews on October 26 after appearing in one game. He didn't have any reception during that game.

The 27-year-old has long backed Carson Wentz back in 2016 during the rookie year of the QB. He fiercely defended him against critics who said he was greedy.

Last year, after injuries decimated their receiving corps early in the season, the Eagles were forced to bring Matthews back. Wentz was relieved to see his strong safety blanket returning to the nest.

There may be no one in the NFL that has a better relationship with Carson Wentz than Jordan Matthews. With their mutual faith and on-field chemistry, the two share a special bond, and the quarterback right now is anxious to have someone on the team who will support him.

Matthews expressed that everyone knows Wentz is one of his great friends. Matthews also told reporters that people would only know any kind of slander with his stature and he honestly thinks it would be a challenge.

Wentz and Matthews were often seen hanging out off the field. The receiver also traveled to Haiti to help Wentz' AO1 Foundation construct sports facilities and both of them wore AO1 cleats during some of the games.

In addition to having a strong personal friendship with Wentz, Matthews also has a professional relationship with him. In 2016, during the rookie year of Wentz, they both culminated 73 catches for 804 yards in total.

The Eagles, from the time of Robby Anderson to Josh Gordon to Donte Moncrief, were linked to every available receiver in the league. Before they signed Jordan Matthews, they had not traded for or taken anybody off waivers. The team's support for taking a flier on Antonio Brown has been raising a great amount of public outcry. It was also causing quite a divisive debate in Philadelphia as both fans and media attempt to justify signing Brown.

In a rare admission, Eagles' head coach Doug Pederson acknowledged Monday that a change was almost compulsory due to the current state of the wide receivers of the squad.

The Eagles might have been able to claim Josh Gordon off the Patriots' waivers last week as well but he went to the Seahawks. Moving forward, the Eagles, 5-4, are off this Sunday heading against the Patriots and Seahawks.