So far, the rumors and tips have pointed out the similarities of both Samsung upcoming flagships but the latest leak should clearly be able to differentiate Galaxy Note 8 from Galaxy S8.

Galaxy Note 8 details aren't that sketchy anymore ever since a schematic leak went viral online. It tells a lot about the design of the impending smartphone from the front, top and bottom.

Galaxy Note 8 display is seemingly confirmed - a curved edge and curved body. The phone will feature a 6.4-inch Super AMOLED display, a much bigger phone than Galaxy S8 with the rumored 5.8-inch screen. With a 4K display, the phone could have 4428 x 2160 screen resolutions, according to Phone Arena. As for the Galaxy S8, it could come with 2220 x 1080 pixels resolution.

The Note 7 successor will have a dual-lens module for its rear camera and a bigger battery capacity than Galaxy S8. Samsung will equip the Note iteration with an S Pen, iris scanner, and USB type C.

Judging from the sketch, the edge-to-edge screen makes the bezels even thinner on Galaxy Note 8. There is a 3.5 mm headphone jack, S Pen slot, and a new button, which is believed to be dedicated for Bixby. There is nothing more to reveal about the sketch but it somehow confirms a few Galaxy Note 8 rumors we've heard before.

However, fans can be sure that Note 8 and S8 won't have many differences except on the optics, battery, stylus and display resolutions. To put into perspective, Galaxy S7 and Note 7 have a lot in commons except on the areas mentioned above, GSM Arena wrote.

Speaking about the similarities, Galaxy S8 and Note 8 will be powered by Snapdragon 835 and Exynos 9000 series depending on the regions. Both will most likely have a 6 GB of RAM in tow coupled with inbuilt storage up to 256 GB.

Nokia 8 Specs, Update: Nokia Goes Much Lower than Premium as Major Drawback Revealed in A ... 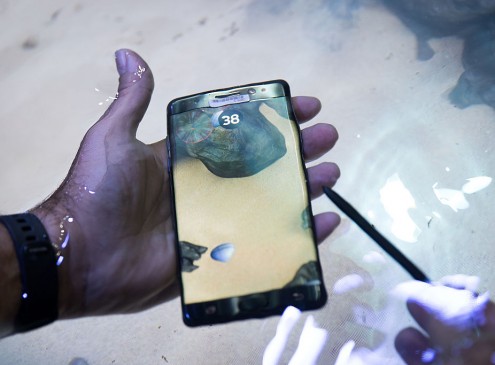