Starz will welcome "Outlander" back for its third season this year. Though Season 3 is still months away, spoilers and plot details have already found their way on the internet.

Season 3 tells the story of Diana Gabaldon's "Voyager," the third book out of the "Outlander" novel series that the show is based on, according to TV Guide. In that book, Claire (Caitriona Balfe) returns to 18th century Scotland and reunites with Jamie (Sam Heughan) after recounting her past adventures to her daughter Brianna (Sophie Skelton) and historian Roger Wakefield (Sam Rankin).

"Outlander" Season 2 ended with a pregnant Claire leaving Jaime for her first husband Frank (Tobias Menzies) in 1948. Jaime urged Claire to return to her era to save her from the destruction of the Battle of Culloden, but she finds out 20 years later that Jaime survived the conflict.

Followers of the "Outlander" books know that the estranged couple will reunite in a print shop. In December prior to the holidays, Heughan hinted on Twitter that he and Balfe are shooting the pivotal print shop scene.

"Outlander" Season 3 will showcase the Battle of Culloden and more specifically, Jaime's final duel with his archenemy Jonathan "Black Jack" Randall (also portrayed by Menzies). Black Jack was the British soldier who raped Jaime in prison in the first season. The first photo of Heughan from the upcoming season showed Jaime in bloody clothes after escaping the battle with his life.

The Battle of Culloden wasn't depicted in Gabaldon's book series. Instead, the novel began with Jaime having little memories of what transpired in the battle.

However, "Outlander" executive producer Ronald D. Moore told Entertainment Weekly that they decided to show the battle because they have been "promising this for a while and it just felt like we should have something." The team wants to give the audience "some sense of what happened on that moor."

It's the clash of the Tartans! Get the first look inside @Outlander_Starz season 3 with 4 photos! https://t.co/COj14CuEtu #Outlander  pic.twitter.com/lpy9ndH5ap

The Battle of Culloden was shot in Scotland in August, with Moore describing the location as "easily one of our biggest set pieces." "Outlander" Season 3 will also feature the grown-up versions of Fergus (to be portrayed by Cesar Domboy) and Marsali (Lauren Lyle), Laoghaire's (Nell Hudson) daughter.

Are you excited for "Outlander" Season 3? Share your thoughts below! 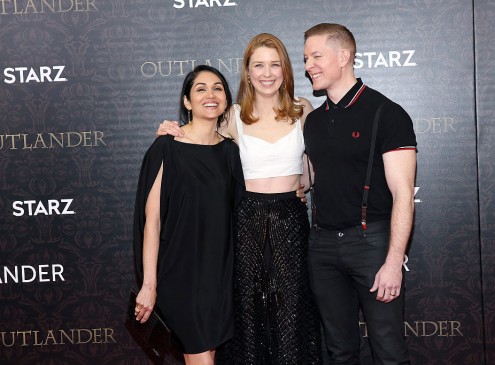