Stephen Amell was busy recently on Facebook, spilling a number of spoiler alert items for "Arrow" Season 5. The TV show will resume on Jan. 25, 2017 but fans are clamoring for answers.

The Black Canary appearing towards the end of the episode is the major cliffhanger this season. Is she really back If so, how and why? According to Green Arrow TV, Amell gave some spoilers that there's a strong possibility that Laurel Lance's resurrection is going to be explain the upcoming episode of "Arrow" Season 5.

The "Arrow" lead star admitted that people don't get resurrected without a suitable explanation. He also stressed on the fact that the character of Black Canary is quite important in the "Arrow" story-verse. Laurel Lance's imminent return to the upcoming episodes will reunite the cast members once again.

Too Many Cliffhangers in Arrow Season 5

The fifth midseason episodes left many cliffhangers for almost all of its major characters. The death of Billy Malone (Tyler Ritter) will definitely leave a mark on Felicity Smoak (Emily Bett Rickards). Curtis Holt (Echo Kellum) also suffered a severe emotional blow when his husband, Paul Holt (Chenier Hundal) decided to leave him.

John Diggle (David Ramsey) and his family were also targeted. Diggle's future is still unknown. He was shown being captured by armed men with no trace as to where his family could be. As for the rest of the members of Team Arrow, it remains to be seen what Prometheus has in-store for them.

TV Line reported that Amell is ecstatic since they are getting a script after so long and a lot of emotions are raging inside him. He also said that they are currently shooting future episodes and even gave some spoilers. There's a possible resurrection and a boy's night out where they hunt for someone.

‘Marvel’s The Inhumans’ TV Series A Way To Copy DC’s Multi-Universe Approach In...

‘The Flash’ Season 3 – With Too Many Speedster This Season, Why Do We Even Need ... 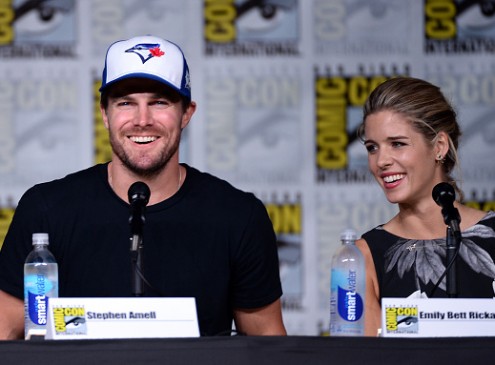