"The Vampire Diaries" season 8 episode 7 promo sees Stefan crashes Steroline Christmas party. Will Stefan make a move to save Stefan or kill him instead?

Damon's recent switch to evil has made a lot of trouble in the series. In "The Vampire Diaries" season 8 episode 7 promo, Damon appears as a threat to Stefan, Caroline and Alaric's twin daughters.

However, this episode could see Stefan as the key to save his brother from evil as he might be fully aware that it is not Damon's fault that he falls into the dark.

Julie Plec has teased to fans, stating that Stefan will focus on rescuing his brother in "The Vampire Diaries" season 8. The strongest reason that could bring Damon back would be Elena's presence. So far, Elena has been keeping Damon in control of his own demon.

As Paul Weasley takes the director helm, he does not spill out much information about the ending of "The Vampire Diaries" season 8, TV Line has learned. However, Weasley talks about a flashback moment in season 8. It is unclear whether this flashback is related to Damon-Stefan brotherhood or something to do with Elena instead.

Regardless of what the next episode will be about, Weasley has stated that the plot may not follow what the fans are expecting. According to TooFab, Weasley said that he has no idea if there will be any Steroline wedding in June.

When asked about "The Vampire Diaries" season 8 ending, the actor has something in mind. He wishes that Damon and Stefan would head towards the sun without their rings on.

With that being said, the fans quickly turn their attention to Klaus who has been known for his love for Caroline. He could be making an appearance in the next episode and change the whole romance story of Steroline to Klaroline once again. 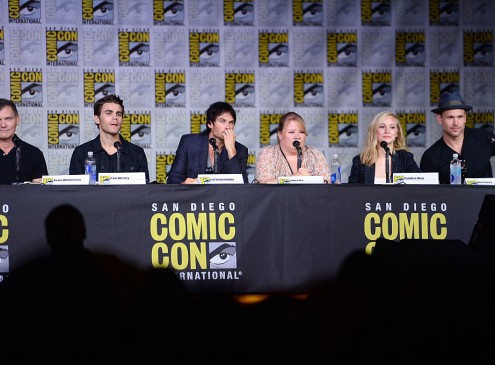