Celebrating Easter in the campus is a chance for students to reflect, enjoy and relax, and now that Easter Sunday is almost here, colleges and universities across the country are now beginning to get in the holiday spirit by doing their hopping good Easter traditions with the Easter egg hunt.

For the people who celebrate Easter, chances are they are quite familiar of the egg-hunt tradition which has been around for so many years. And although Easter is a Christian holiday, the Easter eggs are actually a pagan tradition, according to Bustle. It started way back in the 1700s when the Pennsylvania Dutch believed in an egg-laying hare called Oschter Haws which eventually became the Easter Bunny who became popular not for laying eggs, but of creating nests.

So much for the Easter trivia, here are some of the US colleges which are going to have their yearly egg hunts, according to USA Today College:

This year is not the university's fourth year in holding the annual Golden Egg Hunt, and is going to be hosted by UT- Austin's Coop. The student who will be lucky to find the egg will be rewarded free textbooks for one semester. Other prizes can also be found in orange colored eggs which the coop has kept all around the campus.

The 13th annual community Easter egg hunt that will be held by the university will give the winner $500 worth of scholarship. The other eggs will also contain other prizes like school supplies and candies.

UC-Berkeley will be holding their 23rd annual egg hunt which will include egg hunts for children, and will have more than 40 educational booths and fundraising activities for non profit organizations in the local community. 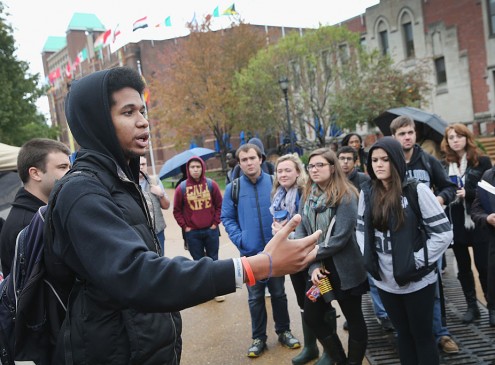 How US Universities Use Big Data to Drive Student Enrollment [Video]