Since lithium-ion batteries were invented and Sony commercialized it in 1991, it has powered almost everything here on Earth from cellphones to Mars rovers. In essence, li-on batteries are what control the world. However, when the Samsung Galaxy Note 7 and hover board fiasco occurred, li-on batteries found themselves in bad light souring the decades long romance with tech devices. What really is inside the li-on battery which makes it like a ticking time bomb?

Lithium-ion batteries are basically made up of five main "ingredients" - lithium cobalt oxide, graphite, polypropylene, ethylene carbonate, and lithium hexafluorophosphate. Here's how each of these ingredients function inside the li-on battery.

The lithium electrode is made up of cobalt and oxygen which merge to become strong and thick layers of octahedrons. They act as a protection for molecules and keep them from crumbling as ions pass back and forth. However, these structures can collapse and explode in very high temperatures.

Graphite, on the other hand, is pure carbon. This is the same graphite used in pencils. Although graphite is non-flammable, it is combustible.

Although graphite and lithium cobalt oxide engage in a give and take relationship, theirs is like Romeo and Juliet as well - they cannot be together, all the more touch is other. When they touch each other, that's when combustion happens causing the li-on battery to explode.

That's where polypropylene comes in - it has to make sure these two don't touch each other. Aside from separating the two electrodes, the tiny holes that perforate this thin, plastic act as the portal where ions can pass back and forth.

Faulty polypropylene can cause the electrodes to touch each other generating too much heat and pressure. This heat can go up to as high as 1,700 degrees Fahrenheit igniting the flammable parts inside the battery.

This clear, organic solvent is the flammable substance in li-on batteries. They are responsible for transporting the ions between the electrodes. If the battery malfunctions, the hot liquid can seep out of the battery and when it comes in contact with oxygen, it will explode.

This powdery substance speeds up the charging and discharging process of the li-on battery. It's non-flammable but it can burn the skin.

Top 5 Grad Schools For Engineering In 2017 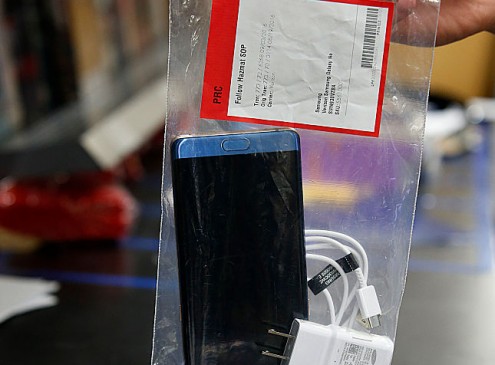