When ODG's AR/VR Smartglasses appears during the CES 2017, Microsoft Hololens has automatically becomes dumb and it has something to do with the looks as well as the Qualcomm Snapdragon 825 SoC in the heart of the devices. Read more details here!

Two pairs of Augmented Reality or AR glasses are introduced in CES 2017 by ODG, a wearable manufacturer company that is known for producing affordable products. According to Digital Trends, these glasses intends to reach the average person because it comes with an affordable price but not necessarily cheap.

Accordingly, the glasses are named R-8 and R-9 that seems to be paving the way for the future of augmented reality as well as virtual reality. However, unlike Google glass, these Smartglasses really look like glasses and the first ones to utilize the Qualcomm Snapdragon 835 SoC and runs the Android 7 Nougat-based operating system, the Reticle OS.

The arrival of ODG AR/VR Qualcomm Smartglasses has said to make the Microsoft Hololens looks dumb. According to PC World, netizens started to realize that AR vision need not to be big and bulky like the Windows-maker headset that weighs 20-ounce heavy enough to dominate the head.

According to the same publication, Qualcomm Smartglasses of ODG R-8 weighs 4.5-ounce almost five times lighter than Microsoft Hololens. Though not as light as a pair of glasses but far enough from the bulky and inconvenient platform of Microsoft.

What to Expect from Qualcomm Smartglasses of ODG?

The Smartglasses are expected to deliver a field of view of about 40 degrees for R-8 and 50 degrees for R-9. The device showcases an AR display demo through Alien movies as well as watching movie trailers inside the lens by which the glasses have projected a clear and bright videos in the middle of the well-lit conference room.

Furthermore, Qualcomm Smartglasses have rear cameras with 13MP which helps in deploying the virtual objects in the real world. On the other hand, netizens are reportedly doubtful shelling out $1000 for the device most especially when HTC Vive and other VR platforms comes in much cheaper price. 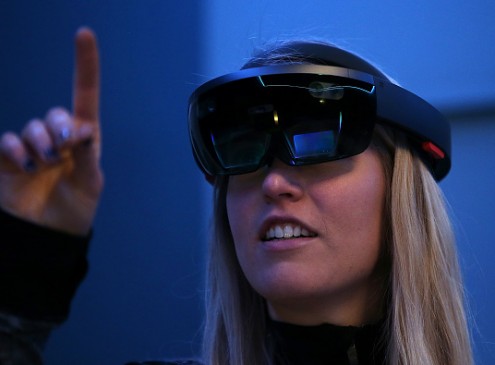