ZTE Blade V8, a mid-range smartphone is rumored to have its official release in CES 2017. Despite being categorized under mid-range, the phone houses decent specs and features as well as the possibility of running Android 7 Nougat has higher chances. See full details here!

Leaked photos of ZTE Blade V8 confirms some of the rumored specs and features of the mid-range Chinese brand smartphone. According to Slash Gear, the leaked photos of the upcoming smartphone revealed the excellent functionalities despite the simplicity of its appearance.

The leaked photos reveal about how ZTE focuses on the camera features of Blade V8 in which as added by Slash Gear, features a 13MP front-facing camera located in the upper right corner with 2MP sensors which perfectly fit for all selfie lovers. Under the hood is a powerful Qualcomm Snapdragon 435 working together with 3GB of RAM for a powerhouse performance and runs the Android 7 Nougat.

Furthermore, ZTE Blade V8 is also said to offer 32GB of internal storage and a screen display which measures 5.2-inch with a resolution of 1920 x 1080 pixels. On the physical aspect, the phone is said to sport an impressive aluminum unibody design which houses the power button and volume rockers at the right side, according to Android Headlines.

In addition, ZTE Blade V8 is also presumed to sport a fingerprint scanner integrated in the phone's physical home button which is akin to Samsung flagship devices and Xiaomi MI Note 2. Also, a 3.5mm headphone jack is said to be seen in the phone based on the leaked images.

The Chinese tech firm ZTE is expected to announced Blade V8 in CES 2017 which will be held in Las Vegas USA. However, as added by Android Headlines, the Nougat-operated ZTE handset will not hit the store shelves in the US the same thing that happen to its predecessor Blade V7 which was released in the emerging markets from South Africa, Germany, Mexico and Spain.

Sony Will Launch Powerhouse Smartphones, Other Products in CES 2017 – Here’s ... 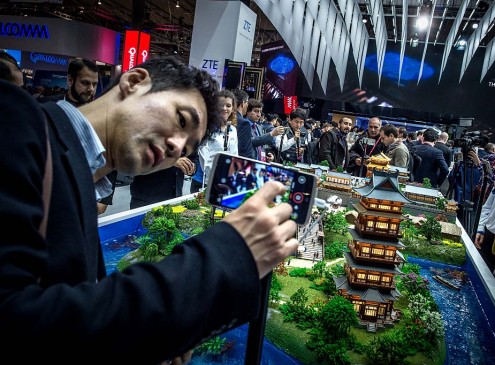