David Petraeus, the former CIA director, will join the faculty of Harvard's John F Kennedy School of Government as a non-resident senior fellow at the Belfer Center for Science and International Affairs.

At the Belfast Center, Petraeus and Graham Allison, Douglas Dillon Professor of Government and director of the Belfer Center, will jointly lead a new project called 'The Coming North America Decades,' which will examine scientific, economic and technological factors that have contributed to North American competitiveness and analyze the potential effects of policy options on American interests.

"We count ourselves fortunate," Fellow HKS professor Graham Allison said in an official statement, while confirming the appointment. "....to have David Petraeus making a major intellectual investment in issues so central to a center whose mission is to advance policy-relevant knowledge about the most significant international challenges."

"He has an inquiring mind, strategic orientation, intellectual fearlessness and appreciation of the academy that will make this a productive partnership."

Petraeus resigned as the head of the CIA in 2012 after an affair with biographer Paula Broadwell was disclosed by an FBI investigation. He spent 37 years in the Army including roles as commander of U.S. and international military forces in Afghanistan, commander of U.S. Central Command (CentCom), and commanding general of the multi-national force in Iraq before becoming CIA director.

"I have worked with David Petraeus for much of the last decade - from the early days after the removal of Saddam Hussein through the implementation of the surge when he was Commander of U.S. Forces in Iraq and I was Deputy National Security Advisor for Iraq and Afghanistan at the NSC.  His capacity for cutting to the heart of the matter and identifying and executing policy initiatives that can bend trendlines makes him the rarest of colleagues," Meghan O'Sullivan, Jeanne Kirkpatrick Professor of the Practice of International Affairs and director of the Geopolitics of Energy Project at the Kennedy School, said in the official statement.

The retired four star army general faced protests from students, activists and teaching staff over his military actions at his previous academic appointment in New York last month. When he accepted the role as a visiting professor at the City University of New York (CUNY) last month, demonstrators accused him of being a "war criminal."

According to Business Insider, when Patraeus commanded US forces in Afghanistan, he is claimed to have ordered the bombing of funerals and other civilian targets with drones, which constitutes a war crime under the International Criminal Court. 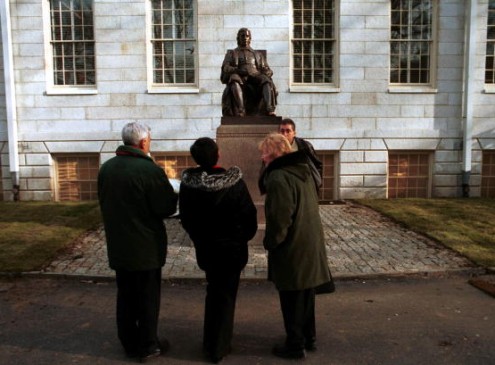