Square Enix officially announced that they will be honoring the "Kingdom Hearts" franchise's 15th anniversary with music, more specifically, a concert that will be held worldwide. The concert world tour will kick off in Japan in August of this year. "First Breath" will be taking place in Tokyo, Aichi and Osaka.

The "First Breath Tour" concert will feature various beloved game music and soundtrack from the "Kingdom Hearts" franchise including "Simple and Clean," "Passion" and "Hikari. " Square Enix said that the music will be played live by the Osaka Shion Wind Orchestra. Tickets for the first three shows in starting August 11 are now available for purchase on the website.

While the "First Breath" concert will only be taking place in Japan, fans of the "Kingdom Hearts" franchise will be able to experience it once again during the World Concert Tour in spring of 2017. According to the tour's official Facebook page, there video that will be playing in the background is compiled by director Tetsuya Nomura himself. The World Tour will also feature 70 musicians from various world class professional orchestra including London's Royal Philharmonic Orchestra and Japan's Tokyo Philharmonic Orchestra.

Aside from Tokyo, the "Kingdom Hearts" World Tour will be in Paris, London, Singapore, China, California and New York starting March 10, 2017 and ends in June 24. The tickets will go on pre-sale on April 30, 2016 at 12 pm local time at the WildFaery website. Others can avail of the international tickets next month, on May 14.

As for the Kingdom Hearts 3" game and its release date, there have been reports that the game might be pushed back again in 2017 instead of this year. While there is no official announcement from Square Enix, Ecunemical News shares the possibility of the delay. Given that Square Enix is bent on releasing "Final Fantaxy XV" later this year, "Kingdom Hearts 3" might be delayed again. Furthermore, the voice actor of Axel in the "Kingdom Hearts" series has tweeted that he has not been called yet to complete his set.

Do you think "Kingdom Hearts 3" will be released this year? Tell us your thoughts in the comments below. 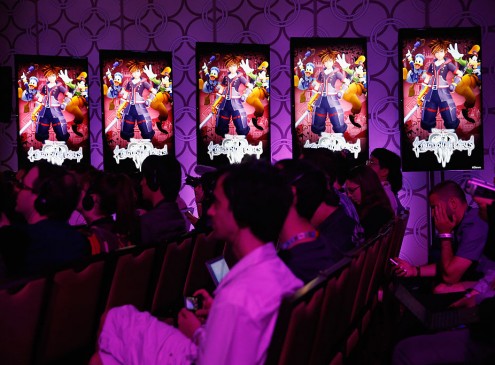