Liberty University is now allowing students with concealed handgun permits to keep their weapons in their dorms starting next fall. However, students will need to get permission from the university first.

ABC News reports that the policy change was approved by the institution's board of trustees this month. Liberty University President Jerry Falwell Jr. said last year that those with permitted concealed handguns could carry their weapons on campus. However, it was previously forbidden to bring handguns inside the residence halls where the students sleep. Liberty University is one of the most gun-friendly institutions in the entire state of Virginia. They disposed the concealed weapons ban in the campus in 2011.

According to CBS News, Falwell was heavily criticized when he made an announcement last year that Liberty University students can carry concealed guns in campus. It was during the time of the San Bernardino mass shootings last year that Falwell said that guns should be carried to "end Muslims before they walked in." Washington Post notes that Falwell explained that he meant Islamic terrorists behind the shootings.


Falwell explained that the new policy change will help eligible students keep their concealed handguns in their rooms instead of having them keep it in the glove compartments of their cars. Liberty University will reportedly provide handgun safes for students who choose to bring their permitted handguns in their dorms. Students must also follow certain gun safety policies. They must immediately put the gun in the allotted safes and keep them there.

However, Falwell said that the changes will only affect older students as majority of Liberty University goers are under 21 and thus, can't apply for handgun permits from the state yet. News Advance shares that in 200 eligible students that are in dorms; approximately 20 of them have permits.

Celebrated Cuban Economist Sacked Over Unauthorized Information Sharing With US 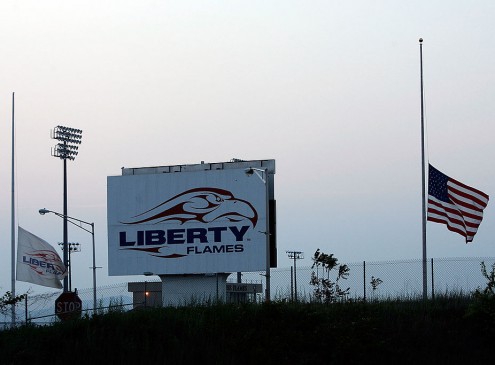