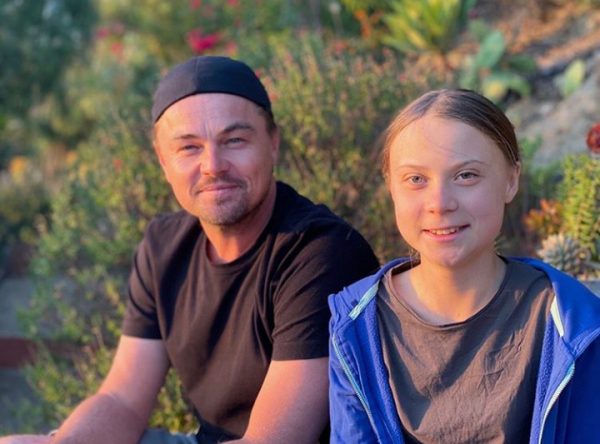 Leonardo DiCaprio, 44, has met with 16-year-old Greta Thunberg, calling her "a leader of our time." He also announced that the two activists have made a commitment to support each other.

The Oscar winning actor said it was an 'honor' to speak with the young climate activist, posting an image of them together on Instagram, Friday.

In the post, Leo said he hopes Greta's message is 'a wake-up call to world leaders'. He added that the girl moves him to be more 'optimistic about what the future holds'.

Greta became widely popular when she spoke before world leaders at a UN Summit tackling climate change. She had been speaking in front of huge crowds around the world to encourage everyone to urge governments in passing laws that will take care of the environment.

DiCaprio, who used his acceptance speech at the 2016 Academy Awards to encourage politicians to "stop procrastinating" on climate change issues, spoke out at a New York conference this September in support of Greta.

Speaking at the Global Citizen Festival, DiCaprio also opposed the decision made by the president in 2017 to withdraw from the Paris climate agreements. DiCaprio said that by denying climate change, Trump and other world leaders had gambled the planet's future away.

"Our future is being gambled away, and our leaders, those whom we entrust to protect us and set the example, are either failing to stop these dangerous trends or, in some cases, denying the very science of this climate catastrophe," he stressed in his speech.

It was not the first time though that DiCaprio comments frankly about Trump. He affronted him in 2017 for "ignoring facts and truths and modern science".

DiCaprio advocates and manages an environmental organization called Earth Alliance. He recently raised $5 million worth of funds to preserve the Amazon rainforest when it was caught in a devastating wildfire.

The Hollywood star is strongly urging everyone 'to support leaders around the world who do not speak for the big polluters, but who speak for all humanity, for the indigenous people of the world, for the billions and billions of underprivileged people' who will be greatly affected by the worsening disasters caused by climate change.

On the other hand, Greta Thunberg's began her campaign in August 2018 when she started skipping school to stage solo demonstrations outside the Swedish parliament every week. Her marches quickly drew attention, and at three climate rallies she attended in North America, thousands of people turned out to support her.

In a memorable speech at the UN, she ripped into world leaders, accusing them of stealing the dreams of children with empty promises. Greta also turned down a £40,000 environmental prize earlier this week. She said that her movement does not need any more awards but instead needed politicians to act on the current issues concerning the planet.

Greta recently appeared on the Ellen show in the US to promote her movement. She also caught Trump's attention and became the content of some POTUS' tweets.