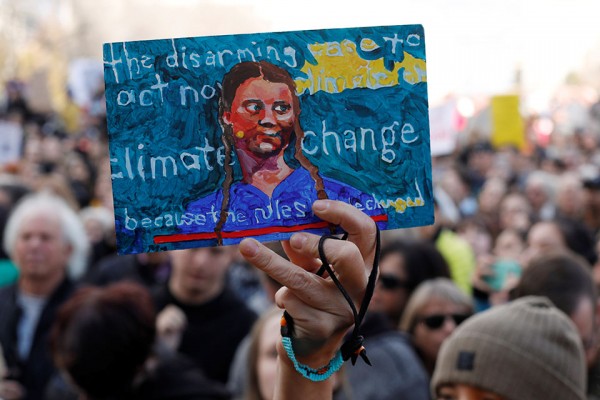 Greta Thunberg has been making headlines recently because of her advocacy to protect the planet and fight climate change. The 16-year-old girl, who hails from Stockholm, Sweden, is now a sensational young activist pushing world leaders to make a strong stand against global warming through relevant environmental projects and laws.

She started when she was 15 and has spoken in front of the masses in different parts of the globe including the one in Poland last December 4, 2018, where she said that the leaders are "behaving like children" so it is up to us to "take the responsibility they should have taken long ago."

Just recently, the climate change advocate visited Edmonton in Alberta, Canada. There she spoke her piece before 8,000 people about the need for governments to help restore the planet. She emphasized, as she always do, that the future generations must blame the older generations for ruining the environment.

In honor of the climate activist, some fans and supporters in Edmonton painted a mural with her face on it. The mural is sending a message of hope and a reminder that a young girl is standing up for children's rights to help save the Earth. The mural was painted by artist AJA Louden on a graffiti wall in the city.

Unfortunately, after a few days, the mural was vandalized by detractors. There were spray paints saying: "Stop the lies. This is oil country," spread across Thunberg's face. There were also some French slurs written in some parts of the mural. One slur said: "Agent provocateur out of Canada."

CBC caught the protest on film and interviewed James Bagnell who sprayed the vandals. "This is Alberta. This is oil country. My father has worked in the oil industry," he told reporters. He also said that his people don't need foreigners to dictate them on how to run their businesses and how to feed their families.

Louden told the CBC that he was not angry that his mural was vandalized because the graffiti wall is supposed to welcome all forms of free expression. "I painted the portrait over somebody else's art work. So I don't feel upset at all about somebody going over mine. One of the goals with painting that portrait was to further the conversation," Louden said.

Greta Thunberg's strong message during the visit was that richer countries need to cut down on emissions fast so other countries "can heighten their standard of living" and work on "building the infrastructure we have already built."

Thunberg made international media buzz after her September speech at the United Nations Climate Action Summit in New York. She slammed world leaders for their lack of action on the climate crisis, accusing them of ignoring the welfare of the planet in favor of economic growth. She exclaimed, "You have stolen my dreams and my childhood with your empty words. And yet I'm one of the lucky ones." She urged people to pay attention to the suffering that people are going through as ecosystems collapse everywhere. She called this era "the beginning of a mass extinction."

Aside from the defaced mural in Edmonton, she was also honored with a mural by climate activists in Bristol, England last spring.