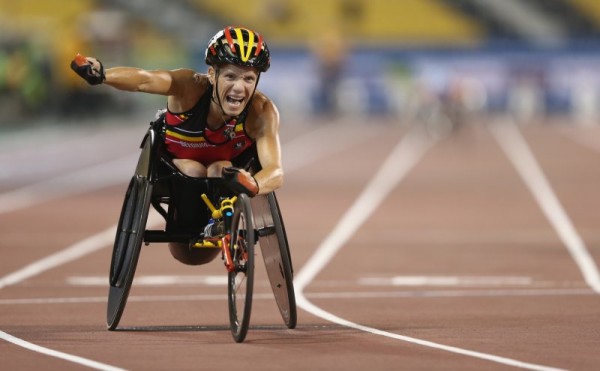 Belgian Paralympian Marieke Vervoort died by euthanasia at age 40 on Tuesday, October 22. The paralympics athlete won gold in wheelchair racing at the 2012 London Paralympics and silver at the 2016 Rio Paralympics.

Vervoort who suffered from an incurable degenerative spinal pain had said during an interview in Rio de Janeiro that sometimes she could only sleep 10 minutes at night because of extreme pain. She said that doing sports kept her going, but there are times even it gets too hard for her.

"Training and doing competition are medicine for me," she said. "Every training day I'm suffering because of pain. Every race I train hard...I push so hard - to push literally all my fear and everything away," she added.

The degenerative disease really got the best of Vervoort and Rio was even her "last wish" of competing. She has literally suffered during the past few years and was already hinting in interviews that she would consider euthanasia as a way to end her career and of course her life.

She advocated for euthanasia and explained that it was not murder to end someone's life. She said committing suicide is far different from it. She also narrated that signing the euthanasia papers gave her piece and made her feel she is in control.

Euthanasia is legal in Belgium since 2002 and as early as 2008 Vervoort had received medical approval from 3 different doctors. Her euthanasia confirmation papers were already prepared before the 2016 games and she has announced that she would sign it when the right time comes.

"I no longer have a fear of death. I see it as an operation, where you go to sleep and never wake up. For me it's something peaceful," she said in an interview with CNN back in 2016.

Aside from her home country and a few more, euthanasia is still illegal in most parts of the world. After signing her confirmation papers, Vervoort advocated for euthanasia and wished to use her position to educate other nations that the process is for people whose suffering is unbearable.

She also shared that she thinks suicide will be lessened if more countries allow euthanasia and expressed the hope that more peopke will stop looking at the process as a murder. In fact, according to Vervoot, euthanasia "makes people live longer."

Vervoort was awarded the Vlaamse Reus in 2015 - an annual prize given out to honor outstanding Flemish citizens by the Flemish Sports Journalists. The inspirational athlete captioned a photo on her Instagram 4 days before her death with: "Can't forget the good memories!"