Researchers at the University of California (UC) San Diego have created the world's ultimate natural sunscreen. For one thing, it mimics the behavior of organic melanosomes, the melanin-producing structures that protect the skin, eyes, and other tissues from ultraviolet (UV) radiation.

Lead researcher Nathan Gianneschi and his team discovered that synthetic melanin-like nanoparticles could be developed in a precisely controllable manner two years ago. The process results in the simulation of the performance of natural melanosomes used in bird feathers. These melanosomes are believed to be taken up by keratinocytes, the predominant cell found in humans' epidermis or outer skin.

According to Science Daily, Gianneschi said that the study succeeded in making a "synthetic version" of the nanoparticles that human skin uses to produce and store melanin. The discovery has a lot of practical applications. For one, defects in melanin production in people can cause diseases such as vitiligo and albinism. Gianneschi is a professor of chemistry and biochemistry and engineering and nanoengineering at UC San Diego.

To further illustrate, vitiligo occurs when the immune system wrongly attempts to eradicate normal melanocytes from the skin. In the process, it stops the production of melanocytes. Albinism, meanwhile, is triggered by genetic defects that lead to either the absence or a chemical defect in tyrosinase. The latter is a copper-containing enzyme that takes part in the creation of melanin.

At the moment, both diseases still do not have reliable treatments. Also, they increase the risk of skin cancer for patients. This is the exact reason why the researchers at UC San Diego decided to create the ultimate natural sunscreen.

Per Phys.org, the scientists prepared melanin-like nanoparticles through impulsive oxidation of dopamine. The experts then studied their update, transport, distribution, and UV radiation-protective capabilities in human keratinocytes in tissue culture. They eventually found out that these the synthetic nanoparticles were not only naturally taken up and distributed but also protected skin cells from DNA damage due to UV exposure. 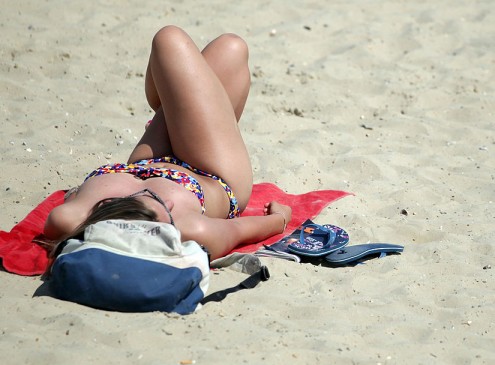