Shooting the basketball "granny style," or underarm throwing, is simply awkward and looks very funny. But, a new study shows that shooting a basketball by throwing the ball from under the arm yields more scores than overarm shooting.

The study published in the "Royal Society Open Science" revealed that a player who will shoot a free throw from the foul line is more likely to score using a "granny throw" than an overarm throw, IFL science reported. Connecticut's Yale University's Madhusudhan Venkadesan led the study on the effectivity of the 'granny throw" style.

The ball will have a better parabolic trajectory with an underarm throw as the study found. By including physics in the equation, the ball has a lesser probability of missing the rim. With a "granny throw" the ball travels at a lower speed, which makes it fall into the net and not bounce out.

Venkadesan said there are social and cultural reasons why people don't use the "granny throw" when playing basketball, The Guardian reported. The important thing is the player shoots the ball, he said. However, it simply is awkward and embarrassing to shoot the ball in that position, like someone who doesn't know how to play basketball at all.

But it's not all corny as retired NBA player Rick Barry proved that it is quite useful. He had an amazing 90 percent free throw record using the "granny throw" style. That record is the fourth best in the history of NBA, and is the highest percentage recorded in the American Basketball Association during the 70s.

The only downside to the "granny throw" is if the player has poor control of the ball, he or she is less likely to shoot the ball. It means it works best for professionals, but not so much for amateurs. But professional basketball players use overarm throw for better accuracy and speed. 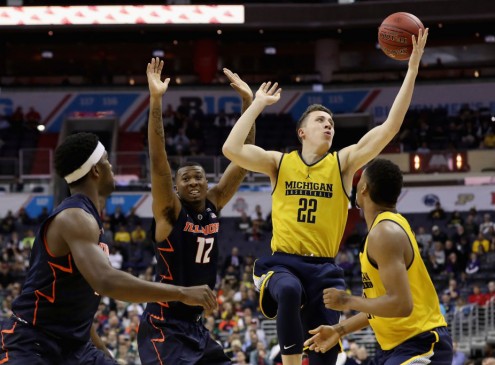