Researchers from Georgia Institute of Technology were able to discover the potential for other uses of a material mainly included in coloring food items. Apparently, the liquid crystals can be used for sensors and other applications.

The study was published in the journal "Proceedings of the National Academy of Sciences." Phys.org reported that the researchers discussed how a class of water soluble crystals, named lyotropic chromonic liquid crystals, demonstrated unexpected characteristics that can be harnessed to be used in sensors and other potential applications.

Karthik Nayani, a former Georgia Tech student who worked on the study, said that they wanted to understand the aggregation and phase behavior of these plank-like molecules as a function of temperature and concentration. Liquid crystals are able to exhibit different textures when observed under crossed polarizers in an optical microscope that show how the molecules are arranged.

Georgia Institute of Technology researchers used the microscopes to observe the molecules' textures when confined to droplets. These droplets are known as tactoids.

They were able to find a configuration that has not been seen before in the decades that liquid crystals have been studied. These materials in tactoids arrange themselves in a concentric fashion without a singular defect.

According to Science Daily, the scientists used a simple model of the aggregation behavior of these molecules to explain the results. Spectroscopic experiments were also conducted using polarized Raman microscopy to confirm the findings.

The discovery can lead to a deeper understanding of how chromonic liquid crystals can be used in sensors. Since the crystals are water soluble and respond to being confined to certain patterns, concentrations and temperatures, its responsiveness to changes in its environment could be used to sense the chirality, or "handedness," of molecules. 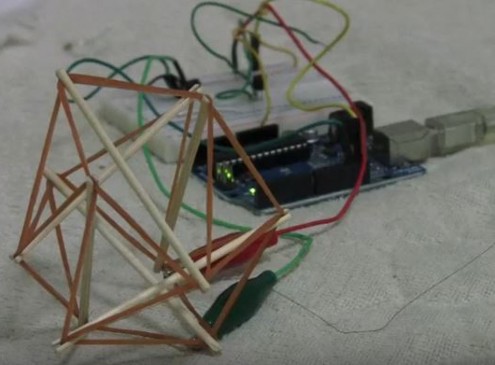