Light sabers used by Obi Wan Kenobi and the the Jedis will not stand a chance against the new weapons that the U.S. military will be introducing by 2020. .These powerful weapons, developed by both private contractors and government agencies, are much powerful than what are being used now ushering the age of Star Wars.

One of these weapons, the 60-kilowatt Lockheed Martin laser system, was recently introduced by the U.S. Army. Lockheed Martin describes it as a 'combined laser' where small laser beams are combined to become a single, more powerful beam.

In 2015, Lockheed introduced a similar laser system, the 30-kilowatt fiber laser ATHENA, which could take down a big truck even if it's still one mile away. However, the weapon is 'diffraction-limited' which means the concentration of the beam has a limit when it reaches a certain point.

The new laser system, however, is more accurate, efficient, and silent. It will be delivered and further tested at the Space and Missile Defense Command/Army Forces Strategic Command (USASMDC/ARSTRAT), in Huntsville, Alabama.

The 60-kw Lockheed is not the only laser weapon system the Department of Defense has in store for the military. At the beginning of March, they also tested a 5-kw lMobile Expeditionary High Energy Laser (MEHEL) 2.0 laser which was fitted on top of a Stryker assault vehicle. The laser is capable of taking down militarized drones. Those drones weigh 20 lbs. and fly at the speed of 115 miles per hour.

Adam Aberle of the Space and Missile Command said that the test have shown them that they can fit a laser and a radar together in one platform enabling the laser to self-cue to target.

At present, the U.S. Navy's USS Ponce is already equipped with a powerful laser system that could obliterate drones, small boats, and light aircraft. The Navy is also planning to equip its helicopters with a defense laser system that can deflect anti-aircraft missiles.

The Air Force, on the other hand, is going to equip its C-130 Hercules transport military aircraft with an offensive laser. By 2020, it plans to equip all of its fighter planes with laser. Aside from the offensive laser, they are also planning to equip these planes with defensive laser which will act as a protective shield against other aircraft, missiles, and drones.

Tags The Age Of Star Wars, Star Wars, Laser Weapons, US military
© 2017 University Herald, All rights reserved. Do not reproduce without permission. 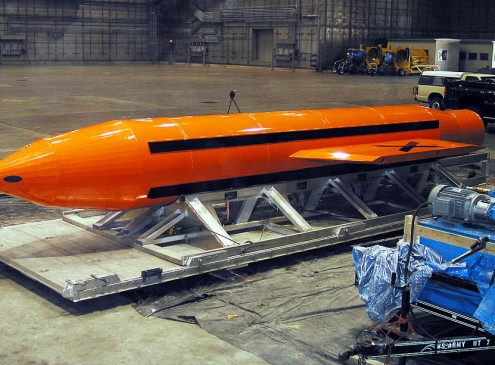 The Chilling Physics Behind The ‘Mother Of All Bombs’ - US Detonates Trump Card [Video...