Regina and Robin Hood's reunion -- albeit an alternate version of him -- is one of the highly anticipated plots on the remaining episodes of "Once Upon a Time" Season 6. The Outlaw Queen (the pairing's portmanteau) reunion was described by the show's creators as a closure for Regina.

Executive producer Adam Horowitz recently shared a script tease on Twitter. The scene picks up after the events of the midseason finale, which saw Regina (Lana Parrilla) and Emma (Jennifer Morrison) being robbed by Robin (Sean Maguire) as the women are about to jump in a portal that will take them back to Storybrooke.

Check out the script tease below. It's particularly endearing how Robin calls Regina as "m'lady" no matter what realm -- or reality -- they're in.

Here's another #OnceUponATime #scripttease -- hope to see ya March 5! pic.twitter.com/JnQ60nymP5

Set photos suggested that Regina and Emma will be accompanied by the wish realm Robin when they return to Storybrooke. This Robin isn't the same Robin that viewers know, but there are hopes that the reunion will still resolve Regina's heartbreak and help her move on from her dead soulmate.

Episode 11 titled "Tougher than the Rest" will also reunite Emma with the wish realm version of her friend, August/Pinocchio (Eion Bailey). According to TV Guide, the episode will restore Emma's "faith that she can choose her own destiny" once she comes back to Storybrooke. The prophecy of her death in the hands of Gideon (Giles Matthey) still stands.

The midseason premiere will prove that there's a deeper connection between Emma and August "for much longer than Emma (or we) ever realized." The man is partly responsible for Emma being the Savior.

The series is gearing up for a musical episode that will showcase Emma in a big solo, with Parrilla also singing in a grand sing-off between the Evil Queen and the Charmings, according to TVLine. The episode, Season 6's 20th, is titled "The Song in Your Heart."

"Once Upon a Time" will reset in Season 7. ABC entertainment president Channing Dungey told Deadline that Season 6 will put a "closure in this particular narrative" and expand the stories by introducing a "strong yet vulnerable" leading man and a bright 10-year-old girl.

It's possible that the main cast -- or at least some of them (Morrison is rumored to exit after Season 6) -- would not be back for the seventh season. "Once Upon a Time" Season 6 returns to ABC on Sunday, March 5.

'The Originals' Season 4 Spoilers Pay Tribute To The LGBT Community; Klaus Freed On One ... 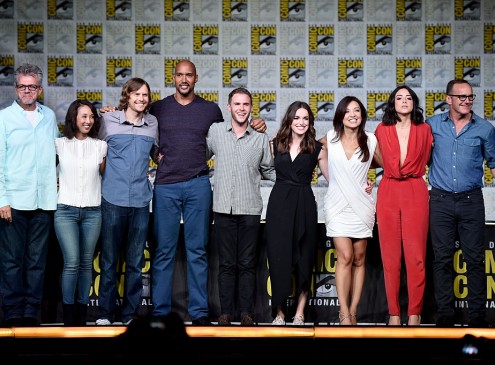