"Pirates of the Caribbean 5: Dead Men Tell No Tales" is bowing in theaters this May. A teaser trailer was already released in October, and fans of the popular franchise are already clamoring for a new one. Fret not; a new 80-second trailer for the movie will be unveiled soon.

According to Trailer Track, Consumer Protection BC recently rated a new trailer for the upcoming film directed by Gore Verbinski. The sneak peek is expected to debut at the 2017 Super Bowl beginning this week. Last year, the event also unveiled the full trailer for Disney's "The Jungle Book."

There are expectations that the upcoming trailer will finally show the first look at Johnny Depp's Jack Sparrow and Geoffrey Rush's Hector Barbossa. The two prominent characters were absent in the first sneak peek, which instead showcased Javier Bardem's Captain Salazar and the young Royal Navy sailor, Henry (Brenton Thwaites).

Some fans are also hoping that Orlando Bloom's Will Turner will be shown in the upcoming trailer. The last time fans saw Will, he assumed the role of Captain Davy Jones of the Flying Dutchman, which forced him to leave Elizabeth Swann (Keira Knightley) to raise their child all by her lonesome.

"Pirates of the Caribbean 5: Dead Men Tell No Tales" will showcase Jack trying to survive as he's being chased by the frightening Captain Salazar, who's escaped the Devil's Triangle to kill every pirate roaming the sea. Jack will look for the mythical Trident of Poseidon to keep his life and he will form a shaky alliance with the astronomer Carina Smyth (Kaya Scodelario) and Henry to accomplish that, ComicBook reported. Viewers will see Jack aboard the dilapidated Dying Gull instead of his beloved Black Pearl.

In the fifth installment of the franchise, Henry will try to reconnect with his estranged father but that's proving to be difficult due to a curse, Mirror reported. The young man will attempt to break this curse.

Fans will have to wait for a few more days for a new "Pirates of the Caribbean 5: Dead Men Tell No Tales" but in the meantime, you can watch the first teaser below. Also starring are Golshifteh Farahani, Kevin R. McNally (Joshamee Gibbs) and Stephen Graham (Scrum). The film is slated for a May 26, 2017 release date. 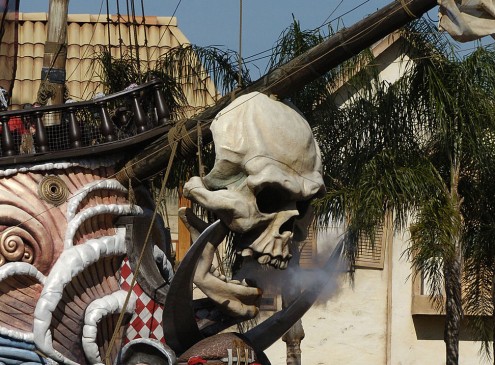