Scientists have identified the source of the mysterious flashes of cosmic radio waves and they call fast radio bursts (FRBs) originating from a small galaxy more than 3 billion light years away.

The source of the mysterious fast radio bursts, according to astronomers, is a dwarf galaxy located deep outside the Milky Way 3 billion light-years from Earth in the constellation Auriga. Though scientists are still boggled what causes these pulses coming from deep space, locating the galaxy where they originate brings them closer to where they actually came from.

Only 18 of these phenomena have been detected since 2007. Their fleeting bursts made it hard to locate and figure out the exact spot of their origin. However, astronomers got lucky with FRB 121102 which reportedly is the only one detected to repeat and have been detected coming from the same location in the sky.

Cornell University astronomer, Shami Chatterjee discovered the repetition, which prompted him to continually observe FRB 121102 employing a huge network of radio telescopes, The Verge reported. He and his team were able to acquire high-resolution images of multiple bursts after observing the spot for many hours. They published their studies in Nature and The Astrophysical Journal Letters, very recently.

It was previously believed that these fast radio bursts are rare, but recent observations have shown that the occurrences are common and that they light up the night sky roughly twice a minute. Chatterjee estimates that 5,000 to 10,000 of these flashes are going off all over the sky, however, they occur randomly, making it hard to catch them and be observed making FRB 121102 a rare find.

Furthermore, finding another repeating FRB would make it easier for scientists to pinpoint another host galaxy. Having more of these repeating sources could help scientists to start using their findings to measure the matter between galaxies.

Predictions for the Space Industry In 2017 from Buzz Aldrin; NASA Plans For Space ... 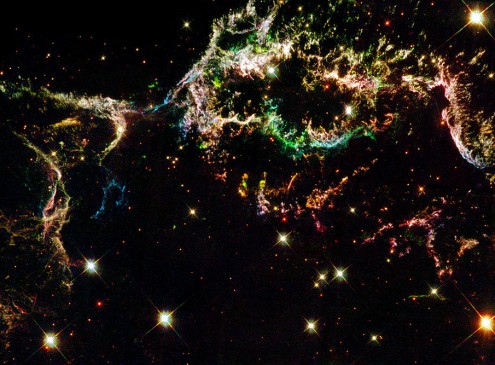