Samsung CES 2017: 8 Expected New Devices And Smartphones From Samsung Next Year, Samsung To Unveil The Much Awaited Samsung Galaxy X

The year 2016 may not be big for Samsung after the Korean giant has experienced plenty of trouble and challenges.  These include scandals, product recalls, increased competition, product delays and more. But Samsung won't giving up its fight and instead, it will continue its advance in the mobile market.

Below are 8 mobile devices that the crowd can expect from Samsung 2017:

Samsung Galaxy S8
This complete fully revamped version of the Galaxy S7 device is expected to be Samsung's redemption from the recent Samsung Galaxy Note 7 scandal. According to Indian Express, the device will feature a dual-curved edge display along with a new Virtual assistant technology.

Samsung Galaxy Note 8
Samsung is said to test its fortunes with the flagship Note series in 2017. The Note 8 will have a dual-screen display and continue with the stylus design. A 4k resolution display is also expected on board, according to ValueWalk.

Samsung Galaxy A-series
The company is expected to launch the 2017 edition A3, A5 and A7 devices at CES 2017 tech event.

Samsung Gear VR 2 and Gear VR 3
Samsung newest wearable devices, the Gear VR2 and Gear VR3 are also coming next year. The new devices are expected to be a revamp of the device based on the Microsoft HoloLens and Magic Leap technologies.

Samsung Galaxy X
Samsung has been working on its foldable smartphone technology for years and 2017 is expected to be the year when the company would finally unveil the new technology in its smartphone. The company is expected to come out with the Samsung Galaxy X, the first phone with a truly, fully flexible and folding Super AMOLED display packed in a unique form factor, according to Know Your Mobile.

Samsung QLED TVs
According to Forbes, Samsung is expected to unveil its new quantum dot display TVs at CES 2017. The new TV is expected to deliver 50 percent better performance than existing Samsung models.

Samsung Galaxy J series devices
Samsung's budget devices namely, J1, J2, J3, and J7 are also expected to be upgraded in the next year. They will have bigger batteries and new processors, courtesy of Qualcomm. 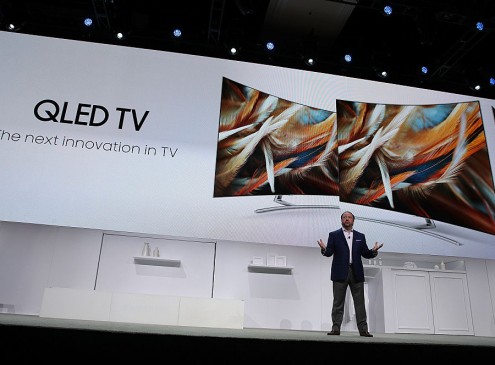