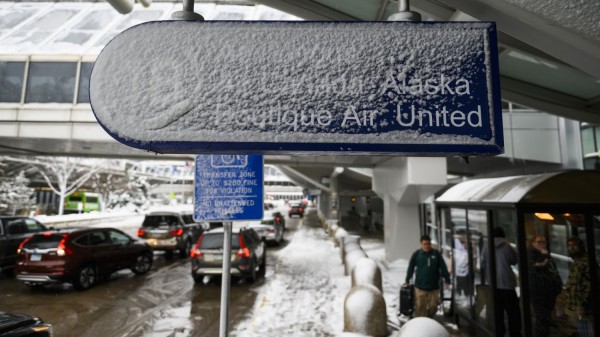 Two powerful storm systems are causing chaos as they dump snow and heavy rain across the U.S., threatening millions of Americans' Thanksgiving holiday plans. And the "bomb cyclone" that hit the West Coast could bring the east with a third storm, reports the Washington Post.

The bomb cyclone that crashed ashore in the Northwest Tuesday night with 100 mph winds unleashed heavy snow over the Sierra Nevada while hitting Southern California with heavy rain, coastal flooding and even isolated thunderstorms, reported by the Washington Post, which notes that it is expected to bring rain and heavy mountain snows into Utah, Nevada and parts of Colorado.

The wild weather shocked nationwide transportation, reports the New York Times. By early Thursday, more than 200 flights were cancelled and more than 3,000 flights were delayed per Flight Aware. Denver was one of the first areas that the storms impacted. There were 463 flights cancelled on Tuesday, as heavy snow pummeled the state of Colorado.

The storms forced temporary road closures from Redding, California to the Oregon border on Tuesday and Wednesday, reports AP. In the Plains and Upper Midwest, a kitchen sink storm was also threatening communities.

In Mississippi and Louisiana, tornadoes were reported. Power outages also occurred in Missouri and Illinois, and parts of the Midwest were blanked by heavy snow, reports the New York Times.

These two powerful storm systems leave millions of people in disarray throughout the United States on Thanksgiving. By the numbers, 1.6 million of the anticipated 55 million Thanksgiving travelers are planning trips of 50 or more miles, an increase of 2.9 percent in last year's travelers.

A total of 49.3 million travelers are planning to drive. This could mean millions are vulnerable to a possibility of getting stuck somewhere due to heavy snow and bad weather conditions.

Because of severe snowstorms, flooding, a bomb cyclone with hurricane-force winds and tornadoes in some parts of the country, the entire weather systems have triggered transport chaos.

Before tracking over the Rockies on Friday, a major winter storm will continue to produce heavy mountain snow and high winds through much of the western United States on Thanksgiving Day. In particular in southern Arizona, heavy rain can lead to flash flooding.

Winter storm warnings extend across much of the world, and the forecast in Denver calls for 15 inches of snow. The Denver International Airport has over 200 pieces of equipment to clear runways, but it has cancelled more than 200 flights. Like other travelers across the world, travelers there are planning to risk holiday conditions.

Only four-wheel drive cars and chains are permitted on roads in Salt Lake City. Emergency crews responded to over 50 Monday incidents.

In Denver, cashier grocery store Tamara Oliver said they were hit twice as hard as people shopping for their Thanksgiving dinner as well. California to Michigan shoppers are scrambling to get supplies from the storm.

Nature rage scenes are beginning to stretch for miles, coast to coast, as drivers are bracing for dangerous roads to get home for the holiday, CBS News says. Weather officials warn that heavy snow will continue until the first week of December.

RELATED: Washing Your Thanksgiving Turkey May Be Risky To Your Health, Experts Say