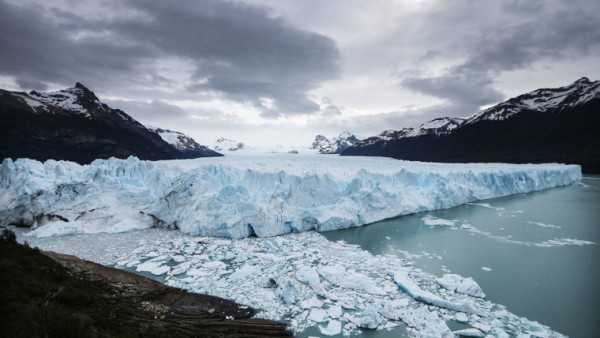 Extending across the Chilean and Argentine frontiers is the Southern Patagonian Ice Field - one of Earth's largest non-polar glaciers. Sadly, it is now thinning out at an alarming rate perhaps due to climate change. The icy mountain range and plateaus stretch along the spine of the Andes for more than 350 kilometers long.

Even in person, the size of the Southern Patagonian Ice Field is hard to appreciate - if put on the white expanse, entire cities would be dwarfed.

From the viewpoint of Paso del Viento (which means Windy Pass in English), large stretches of jagged moraine-shaped ice extend towards the horizon, engulfing all but the highest peaks of the mountains.

Looking back in time, the ice field occupied much of the western edge of South America during the Last Glacial Maximum (LGS) about 18,000 years ago.

The ice field can extend about 13,000 square kilometers, but it is surprisingly elusive. Hemmed in by all sides of snow-drenched mountains, this glacial behemoth only shows itself to the outside world by pouring through the surrounding mountain valleys.

Tourists flocking to Chile's Grey Glacier and the iconic Perito Moreno Glacier in Argentina are actually witnessing ice field tendrils as they enter the Patagonian flatlands.

Strong winds, heavy snow and the risk of falling through a crevasse make it a difficult job to explore the ice field. It wasn't until 1998 that the first north-south crossing registered and getting close is usually limited to airlifted glaciologists or seasoned mountaineers.

Nevertheless, a demanding 4-day hiking trail of 64 kilometers known as the Huemul Circuit brings intrepid travelers to the edge of the glacier, waiting for panoramic views of these seldom seen landscapes. Hikers have to skirt the edge of a small glacier before ascending hundreds of meters to reach Paso del Viento, the entrance to the ice field itself, after scaling through thickly forested slopes.

There's still a lot to learn about the ice fields of Patagonia. A recent study by glaciologists from the University of California, Irvine - with partner institutions in Argentina and Chile - discovered that some gigantic sections were significantly thicker than was once assumed.

A separate study reported that between 2002 and 2017, the Northern and Southern Patagonian ice fields shrank by an average of 24.4 Giga-tons per year - a volume of water equivalent to about 10 Olympic-sized swimming pools.

By measuring subtle changes in the gravitational field of the Earth, they have been able to calculate that the parts of the ice are up to 1,600 meters deep. But global warming and climate change could spell disaster. Many of the outlet glaciers are melting rapidly, while the ice field itself dilutes at an alarming rate. If the planet continues to heat up, researchers fear that this pristine natural wonder may not last long.