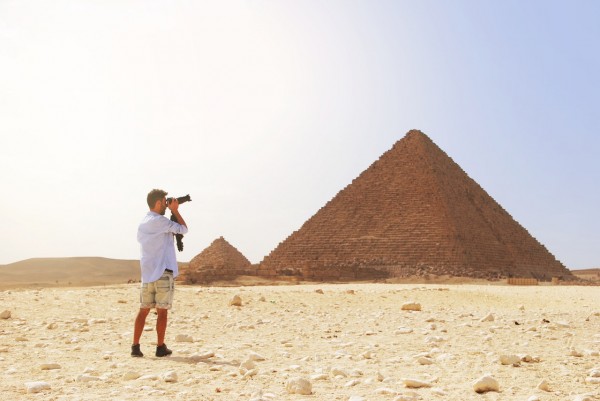 Pyramids are incredibly old and the engineering methods are even more incredible. They don't seem like much in pictures until you see those huge boulders in person. You would start thinking about how they were all piled up to a towering height.

These pyramids are built out of solid granite blocks and gigantic rocks. Granite is incredibly hard, dense and heavy. These blocks are about 300 tons each. That is about 600,000 lbs. (272.16 ton), practically heavier than a row of trucks congested in one street.

These are blocks that could not be moved by the largest cranes we have today. Very likely it would be disastrous to move even a portion of these pyramids. How they were moved, lifted, and placed on top of each other thousands of years ago is still a mystery. Because of the fantastic engineering of these pyramids, it will still stand after 10,000 years - a time in which most of the structures and skyscrapers we have built will have crumbled down into nothing.

The granite blocks are meticulously put together as if someone had anti-gravity technology and built them exactly like a kid might put together puzzle pieces. They seem to have been picked up weightlessly and dropped into exact positions.

It seems that all of these pyramids around the Earth have the same technology that is even better than what our present-day engineers use. Their durability can be calculated to withstand hundreds of thousands of years.

But what did these ancient civilizations use them for? What was their motivation for building such magnificent structures?

The pyramids of Ancient Egypt are believed to be used for burial and storage. Nevertheless, researchers speculate that these pyramids possibly are part of either local power stations or global power networks as they are now discovered in different parts of the globe.

Some experts believed that they could have been designed to draw electromagnetic energy out of the Earth since most of these pyramids seem to be put in very specific locations relative to the Earth's natural energy.

Some set of pyramids were lined up to form certain shapes or aligned according to that of a certain constellation. People started to find patterns as to how and why they were arranged so. Looking at the pyramids all over the Earth, it is easy to tell that most were aligned exactly like the stars in the sky, which seems to indicate when they were built.

The pyramid in China is another amazing sight as it is buried underneath a lake. Divers discovered this great structure in China's second deepest lake and it is about the same size as the Great Pyramids of Egypt. Researchers surmised that the said pyramid was built long before the last Ice Age since it is now situated underwater.

There is also a pyramid in the middle of a mountain in China. It appears there is a giant triangular structure on top of the mountaintop and most of its body is buried underground. Some Chinese historians believe that this was 'the center of the universe.' In today's term, the pyramid could be suspected as the connection between human beings and interstellar, extraterrestrial beings.

They seem to be all over the place that even some explorers found huge ones in the wilderness of Antarctica.