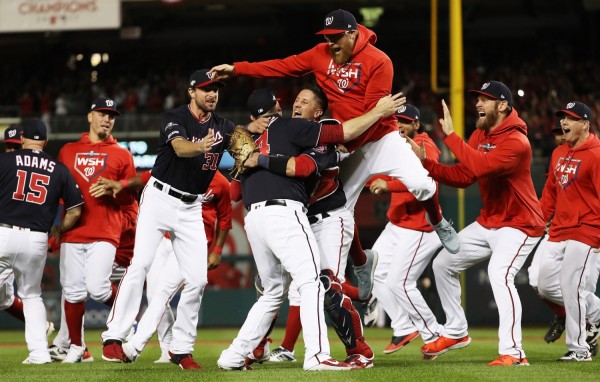 The Nationals escaped elimination by beating the Astros 7-2 in Game 6 of the 2019 World Series. The win on Wednesday is said to be forcing a Game 7.

Washington Nationals starter Stephen Strasburg was the winning pitcher of the game. He lasted 8 and a 3rd innings, striking out 7 only allowing 2 runs on 5 hits.

Astros ace starter Justin Verlander was the losing pitcher, making his 2nd loss of this series. He is 0-6 as a starting pitcher in 7 career World Series games. He pitched 5 innings, losing 3 runs on 5 hits and 3 walks with 3 strikeouts.

The Nationals drew first blood, opening the game on a run-scoring single by 3rd baseman Anthony Rendon. He delivered 5 RBIs before the night was out while Trea Turner, after a lead-off batter, hit an infield single and moved to second base.

The Astros struck back immediately in their half of the first inning with a sacrifice fly by 2nd baseman José Altuve after a first-pitch double by center-fielder George Springer. Springer took 3rd base on a strong wild pitch by Washington's Strasburg. One out later, 3rd baseman Alex Bregman hit a solo homer that gave Astros a 2-1 lead. However, those proved to be all the runs the Astros could score.

The Nationals, which had scored only 3 runs in the previous 3 games they lost at home in Washington, finally capitalized in the 5th inning. Eaton and left fielder Juan Soto each hit solo homers, taking the lead at 3-2.

Houston was terrified in the bottom of the 5th inning after right-fielder Josh Reddick singled and Springer followed with his second double of the game. Strasburg, however, retired on the next two batters.

Astros reliever Brad Peacock opened the 6th inning in place of Verlander. The 7th inning opened with a sequence of plays that will likely be talked about for a long time.

After a single by Nationals catcher Yan Gomes, the next batter was Turner. He had beaten out a dribbler to the reliever Peacock who threw late to 1st base. The throw got past 1st baseman Yuli Gurriel as the runners advanced.

Turner was then called out for running in the base path and intercepting with Peacock's throw. The umpires consulted league officials in New York for the call. After a long delay, the call on the field was confirmed. The Nationals manager Dave Martinez was ejected after an explosive argument with umpires. The last manager who was also ejected from a World Series game was Bobby Cox for the Atlanta Braves back in 1996.

During the 7th inning stretch, Nationals Manager Dave Martinez was visibly upset with the umpires and was ejected during the exchange. pic.twitter.com/AZ23MusrNN — FOX Sports: MLB (@MLBONFOX) October 30, 2019

The Nationals' Rendon launched a two-run home run that extended the team's lead to 5-2. Strasburg retired the Astros without incident in the 7th and 8th innings. He was pulled out and replaced by reliever Sean Doolittle after retiring the 1st batter he had in the 9th.

Because of Game 7, the 2019 World Series is now the 1st post-season series across professional baseball, hockey and basketball in which the road team won the first 6 games.