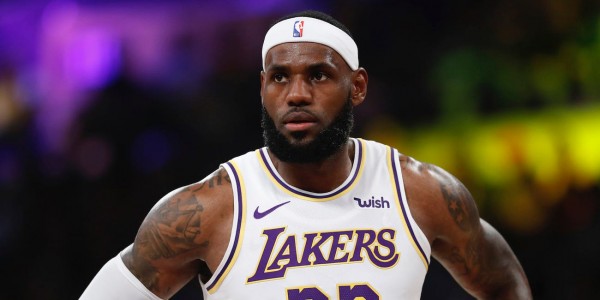 NBA and Lakers star player, LeBron James sent a taco truck to firefighters battling the Getty Fire after he and his family were forced to evacuate their Brentwood home in Los Angeles, California.

Los Angeles Mayor Eric Garcetti shared photos of firefighters enjoying the food from the truck and tweeted his gratitude to LeBron on Tuesday.

James has been vocal on social media about the Getty Fire that began early Monday. In one of his posts, he advised everyone to "get to safety ASAP."

He also shared that they were driving around and are having trouble finding a place to accommodate them after they were forced out of their home due to the wildfire.  On Tuesday night, just before the Los Angeles Lakers home game, he told reporters about the terrifying moments he had while fleeing his home. "It's just challenging at that hour, getting my family, getting my kids, getting everybody and having to evacuate at such a rapid, rapid rate." He shared that it is impossible to spare time to think about "what you can get or what you can do" because going out and being safe takes precedence over everything. He also shared that he was also praying for other victims and communities affected by the fire.

Man these LA aren’t no joke. Had to emergency evacuate my house and I’ve been driving around with my family trying to get rooms. No luck so far! ‍️ — LeBron James (@KingJames) October 28, 2019

The wildfire incident, now known as the Getty Fire, broke out Monday before dawn and has spread across 656 acres. Los Angeles Fire Chief Ralph Terrazas said early Tuesday that 24 fire departments responded to the Getty Fire and collectively there are 1,165 personnel who are assigned to the incident.

According to the Los Angeles Fire Department (LAFD), only 15 percent of the flames were contained as of Tuesday afternoon.

There are over 7000 residences included in the mandatory evacuation zone. The LAFD reported that 8 homes have been destroyed and 6 more were damaged. According to officials, thousands remain under force-evacuation and are not allowed to return to their homes until Wednesday.

As a result to the solidarity efforts and bravery of the firefighters, James expressed his gratitude by sending a Taco Truck to the first responders' base camp to feed them lunch. James sent his "best wishes" to first responders through a tweet.

My best wishes as well to the first responders right now doing what they do best! — LeBron James (@KingJames) October 28, 2019

In a separate interview, James told ESPN: "It definitely takes a lot of bravery, a lot of commitment, a lot of sacrifice in any job that you take, but when you're at the risk of your life any time you're called upon, it's a different type of mind state that you have to be in."

He assured everyone that their efforts to contain the fire do not go unnoticed and is definitely appreciated.