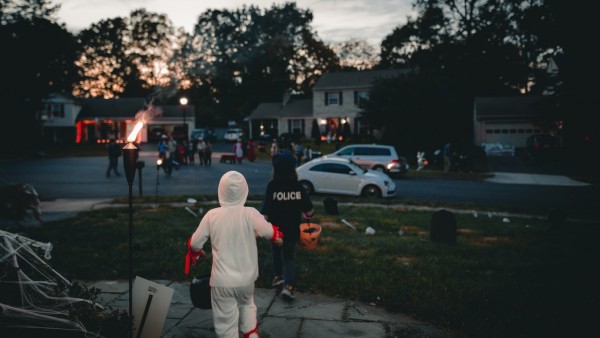 Sam Hall, a boy in Iowa, made social media buzz this week when he dressed up as Carson King, the football fan who went viral on live television for his requests for Venmo donations jokingly to buy more beers. The viral fan raised over $3 million in donations and he later gave all of it to a charity.

His mother shared that Sam has decided on the concept over a month ago and even then, he has had the support of his uncle who convinced hie mom to open a Venmo account for him. She said on a Facebook post, "His uncle talked me into opening a Venmo account so he can donate money to the U of I Children's Hospital. Just like Carson."

The post also included aphoto of Sam holding a sign that reads: "Root Beer Supply Needs Replenished," on top and "Venmo Sam-Hall-85 #ForTheKids," at the bottom.

Sam's mother, Cindy Sobaski Hall, posted an update that as of Saturday, Sam had raised $8,000.

The boy's inspiration for his Halloween impression is Iowa resident Carson King who held a sign up in the background of ESPN's "College Gameday" football match-up between the University of Iowa and Iowa State University in September. King was asking viewers to send him beer money and it was all meant as a joke.

King shared with the reporters that he started it a a joke to get some money for "some lattes."

According to the Iowa City Press Citizen, not only did viewers donated, more than 35,000 people donated to the beer-drinking football fan's Venmo account after it went viral.

King raised over $3 million and donated it (after buying a case of Busch Light for himself) to the University of Iowa Stead Family Children's Hospital. After noticing King's media frenzy, Busch Beer and Venmo both gave the same amount of donations King received.

On his Instagram account @carsonking2014, he posted, "To think this all started as a joke so I could buy a case of Busch Light...Pretty neat weekend."

"The University of Iowa does the wave to the kids since the hospital overlooks the stadium, and being an Iowa State University fan, I figured this would be my way to help out," King said in a statement.

They said that King has had social media posts which are not aligned with the company values and because ofthat, they do not wish to keep being associated with him. However, Anheuser-Busch had assured everyone that they will honor their commitment to donate over "$350,000 to the University of Iowa Hospitals and Clinics."

King, who was only 16 during the time he tweeted the messages, explained and apologized for the tweets. He said, "I see it was an attempt at humor that was offensive and hurtful." As a result, the public who supported King took the matter to social media and the reporter who exposed King's tweets got fired by the Register.