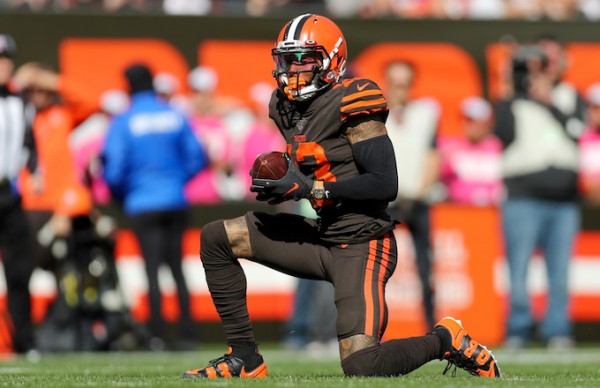 The NFL has imposed a penalty on Cleveland Browns wide receiver Odell Beckham Jr. after it was ruled that his pants "failed to cover the knee area" during Cleveland's 32-28 defeat by the Seattle Seahawks on the October 13 game. The 26-year-old has been fined $14,037 for the "uniform violation" and has criticized the fine as "ridiculous".

He posted a letter received from the NFL on his Instagram story. "This [...] is ridiculous," referring to the $14,037 fine he was given for a uniform and equipment rules violation.

The NFL states that the uniform rules help to "protect players from injury, maintain competitive balance, create a professional appearance and protect the league's business partnerships". The rules also state "pants must be worn over the entire knee area", therefore, pants "shortened or rolled up to meet the stockings above the knee" are strictly prohibited.

#Browns Odell Beckham Jr. posts on IG story that he was fined $14,037 for his pants failing to cover his knees during the #Seahawks game pic.twitter.com/EZAtSxtIqq — Mary Kay Cabot (@MaryKayCabot) October 22, 2019

"14k for some pants that are not gonna protect me from anything," Beckham vehemently reacted.

Beckham Jr. got upset over the NFL implementing the rules for the way he wore his pants, but it's widely known that the league tends to be very strict when it comes to uniform and equipment adherence.

This is not the first time Beckham has violated the league's rules. In 2016, he was fined $18,231 for a uniform violation. He also committed another violation during the 2019 season opener, when he was called out for wearing an $189,500 Richard Mille wristwatch and wearing a very dark visor on the field.

There was actually no specific rule barring him from rocking the expensive accessory while playing, so the league could only speak to OBJ about wearing the Richard Mille. The NFL simply let that one slide but this new issue with Beckham is apparently against the rules and it has to do with his pants.

Beckham can still file an appeal against the recent fine, which is the 13th in his entire career. The football star ranted on social media about how the NFL should be lenient with small things like accessories or sportswear that does not really affect the games. He also said that the players are bringing in huge money for the league and that fines on "stuff doesn't need to be so strict."

He was fined the same amount earlier in October for his "unsportsmanlike conduct". That time he had an on-field brawl with Baltimore Ravens cornerback Marlon Humphrey.

The NFL is yet to comment about Beckham's social media rants. However, the league is most probably firm with implementing the uniform rules and collecting the fines accordingly.