Apple Inc. has radically overhauled its 2017 iMac lineup with speed and features. The 2017 iMac models brighten the 5K display, which gives the device the ability to simulate more colors. However, the benchmark results of Apple's new 27-inch iMac showed a 15% faster in multi-core CPU performance than the previous generation models.

Recently surfaced reports made it known that the new 27-inch iMac benchmark result is 15% way faster in multi-core CPU performance than the previous iMac models. The stock configuration of Apple's latest high-end 27-inch iMac has a 3.8GHz quad-core Core i5 processor along with a multi-core score of 14,886.

The GPU performance of the new 27-inch iMac has upgraded considerably with an increase of up to 80% than the 2015 iMac model. The iMac 2017 model's low-end Radeon Pro 570 has more speed compared to the high-end Radeon R9 M395X in the iMac 2015. In spite of that, both the Radeon Pro 580 and the Radeon Pro 575 outperform Mac Pro's FirePro D700, Digital Trends reported.

Since 2010, this is the first time that the Cupertino based tech giant offers desktop-class graphics chips inside the all-in-one computer, as it was a low end card that was available 7 years ago. The power draw of the 14nm design of the Polaris graphics chips is much lower compared to the last generation 28nm AMD graphics, Apple Insider reported.

Apple is set to launch the iMac Pro with workstation-class tech specs in December. The iMac Pro will come along with a high-end Radeon Pro Vega graphics, up to 4TB of SSD, up to 128GB of ECC RAM and an 18-core Intel Xeon processor. 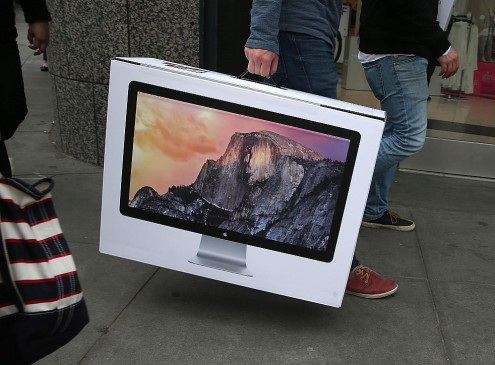