There is a spark of renewed interest over the Bermuda Triangle after the recent mysterious disappearance of a prominent New Yorker Jennifer Blumin, her two sons, and their pilot as their plane was flying over the area. The weather was fine that day and the plane took off without a problem, which continues to baffle investigators.

The recent Bermuda Triangle disappearance was just one of the many mind-boggling incidents that happened in the region. As far as record shows, hundreds of ships, yachts, and more than 70 planes including the one that carried Blumin and company have met a mysterious fate in the area.

Some of the most popular disappearances include the USS Cyclops which suddenly disappeared in the area in 1918 along with its 309 crew and the cargo ship El Faro which also went missing with 33 men on board.

A lot of theories have arisen regarding the mystery that surrounds the Bermuda Triangle. Some of those include a large, invisible alien colony, a strong electromagnetic field, bad weather, and a large undersea field of methane.

One theory that seemed to make sense, however, was that from a group of meteorologists who proposed that the region is surrounded by hexagonal clouds that produce 170 miles-per-hour air bombs.

They came up with the theory after studying the imagery taken by a NASA satellite. The images, they said, suggest that these clouds can spread between 20 to 55 miles across with 45-feet high waves inside them.

Ryan Cerveny, a meteorologist from Arizona State University, said that these air bombs are caused by microbursts, a phenomenon where blasts of air from the bottom of the cloud come down with such force that big waves are produced when they hit the ocean. The waves become more massive when they interact with each other.

If the theory is indeed true, then that could be the reason for the hundreds of disappearances. Satellites continue to hunt for these types of clouds to give more weight to the theory. 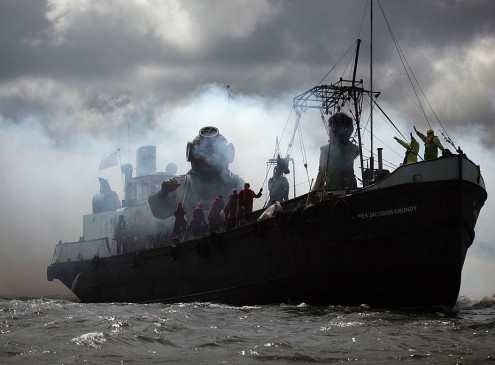