Samsung Galaxy Note 8 is even more exciting to talk about than the Galaxy S8. This is due to the recent image leak and the previous reports that suggest a brand new, slimmer design 6.4-inch smartphone with a thinner S-Pen is coming.

Samsung is said to introduce the 6.4-inch smartphone with a slimmer dimension. Samsung Galaxy Note 8 will have a set of new features, one of which is the in-screen fingerprint scanner. As it comes with a sleeker body, Samsung might equip the flagship with a slimmer stylus to fit in the thinner body. The impending premium handset will also sport dual-camera setup and it is highly plausible that the South Korean giant will release a few models of Note 8, Phone Arena reported.

Aside from the infinity display rumor, Samsung Galaxy Note 8 will have a 4K resolution. A 4K device is not a new thing as Sony launched Z5 premium with such display technology before. However, the upcoming Note series might steal the attention since Samsung's smartphone will be much more powerful.

The smart assistant, Bixby, has made an appearance in Galaxy S8 commercial video and it is highly likely to arrive as one of the key features in Samsung Galaxy Note 8. Corroborating this speculation, a recently leaked image of the alleged Galaxy Note 8 shows an on screen display of Bixby assistant with a dedicated button on the right side of the phone, Slashleaks reported.

Extrapolating further, the handset will rock a Snapdragon 835 chipset - and just like its S sibling, it could come equipped with a 6GB RAM. The upcoming handset will mark the company's come back after the Note 7 disaster. Samsung Galaxy Note 8 is expected to make a huge success but it will be challenging for the tech giant that wants to take on Apple. This year, Apple reportedly prepares a curved screen iPhone 8 with the powerful A10x chipset in the processor department. If the Note 8 sells for a cheaper price, the offering might look more appealing to consumers.

One thing that experts know for sure, Samsung Galaxy Note 8 will come with Android 7.1 Nougat pre-installed as the Android O will not probably be ready when the phone debuts.

Check out more reports on Samsung Galaxy Note 8 in the video below! 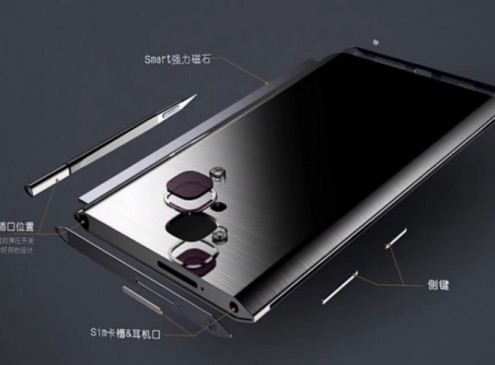