A supermassive black hole has been discovered by NASA and various astronomers which has been ejected from its parent galaxy. The reason for it being kick out is still under study but many believe that it could be caused by gravitational waves made from two colliding black holes near the center of its galaxy.

According to NASA estimates, the black hole, which is called 3C-186 is speeding out of the center. Scientists and astronomers are at first baffled by the phenomenon as they estimate that the energy needed to push a massive object like this black hole would need the energy released by 100 million supernovas going off simultaneously. However, because of the recent affirmation of the reality of gravity waves, astronomers have somewhat unanimously hypothesized that this may be the culprit for this amazing phenomenon.

At first the photo taken by the Hubble telescope of the galaxy almost eight billion light years away show a quasar within the galaxy itself. However, the quasar, which is the visible part of a massive black hole, can be observed to red shift. This means that somehow, this black hole is moving away from the center of the galaxy. Estimates say that it is racing out of the galaxy at 7.5 million kph, which still would take 20 million years before the black hole would exit the galaxy entirely.

Science News reported that the Marco Chiaberge and his colleagues will post a paper on this subject that will detail their observations in Astronomy & Astrophysics. Chiaberge's team from Space Telescope Science Institute in Baltimore have done most of the studies over this supermassive black hole ejection, based on data from the Hubble Space Telescope.

As more observational data is collected, NASA and other independent scientists will have a better picture of galaxy formation during the early stages of the universe. The study will also help improve how astronomers detect gravitational wave signatures and its effect on matter in space. 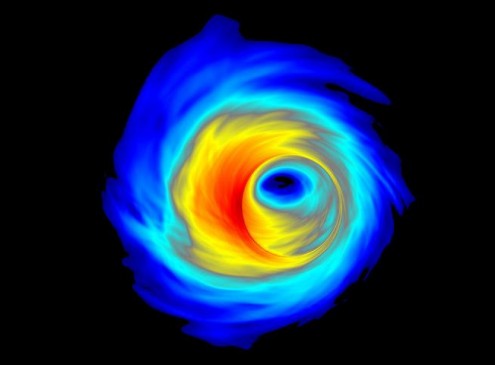