"Vikings" Season 4 episode 11 star Katheryn Winnick reportedly revealed about her character's new love interest. Winnick not only spilled the beans about the upcoming episodes but also revealed that Lagertha would be falling in love with Astrid. Previously, the show creator Michael Hirst revealed that Lagertha's terrible experiences with men developed trust issues within her.

A season trailer for "Vikings" Season 4 episode 11 also revealed Lagertha locking lips with the female character. The shieldmaiden may not necessarily be a lesbian. However, Winnick noted that the relationship is indeed a special one, saying that Lagertha found a love with Astrid that other men apparently were never able to give her, Monsters and Critics reported.

Lagertha reportedly had a difficult time healing her broken heart when Ragnar cheated on her with Aslaug. Then, her second husband was abusive. Finally, Kalf usurped her. Winnick also teased that the audience may come to like the special relationship between her character and another female character in "Vikings" Season 4 episode 11.

Moreover, Astrid is also rumored to be Lagertha's successor. "Vikings" Season 4 episode 11 and the succeeding episodes are expected to reveal Lagertha grooming Astrid to become a warrior. The relationship between the two is expected to have a strong emotional connection. Additionally, Winnick revealed that her character will reunite with Ragnar, Floki and Rollo in the battlefield which may cause the unexpected death of one.

Meanwhile, "Vikings" Season 4 episode 11 is also expected to include Ragnar's now grown-up sons. The characters have previously been introduced during the mid-season finale last spring. First off is the firstborn, Ubbe who will be played by the Scottish actor Jordan Patrick who also starred in Angelina Jolie's film "Unbroken," The Young Folks reported.

"Vikings" Season 4 episode 11 will also include the other members of the Great Heathen Army which Ubbe leads. His brother, Ivar the Boneless is being played by the Danish actor Alex Høgh Andersen. Hvitserk will be played by the Danish actor Marco Islø. Finally, "Blue Eyes" actor David Lindström plays Sigurd in the hit series which will continue on Nov. 30 at 9 p.m. on The History Channel.

'The Strain' Season 4 Updates: Here Is Where The Season Will Pick-Up For Episode 1; ... 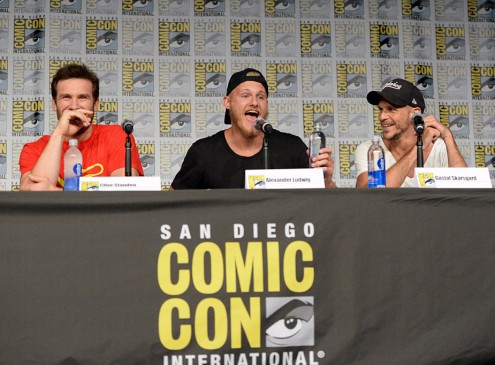