Who would have thought that a single mother living on welfare and struggling to keep herself and her child warm during the winter, will become the world's richest author. J.K. Rowling is now estimated at $1 billion, a far cry from her life not so long ago.

How was she able to do it? The celebrated author believes in luck and hard work but aside from these factors, she also shares nine habits that have led her to success.

A lot of people are afraid of failure and think that it is the end of the world when it happens. Rowling shares that she is the biggest failure she has ever met given all the things that she's gone through. However, she persisted and kept on springing back after each failure. The rest, they say, is history.

When Rowling thought of the idea for Harry Potter, she was very excited and spent the next five years creating the plot for each book. That resulted in creating a series of books that changed the reading habits of both kids and adults all over the world.

No one can say it better than the author when she advised her audience to do what they love because it will make them work harder. She said that if a person works on something that isn't their passion, they will go about life unfulfilled.

Have faith in yourself and in what you do. Rowling had enough faith in her work that even after 12 rejections from different publishers, she continued until one publisher accepted it. Difficulties will always come at us in every form and size, but having faith will help you overcome all of them.

Just like difficulties, there will always be criticisms. Rowling had her time with criticisms when some people accused her books of promoting witchcraft but she just let them be and soon those criticisms just died down. Success always comes with criticisms and you can use them positively to improve yourself and your craft.

Rowling recounted the time she hit rock bottom but instead of hurtling herself into the abyss of despair, it became her source of strength realizing that even after that difficult moment, she still have the things important to her - her daughter, an old typewriter, and a big idea. It has been proven time and again that the human spirit finds its greatest strength in the darkest time of their life.

One of the most memorable quotes Rowling has was about having an "expiry date" in blaming your parents if they have steered you in the wrong direction. She said that the time you become old enough to drive, then the responsibility becomes yours.

According to the author, letting the imagination run free is not only for kids. She added that it is, in fact, the spring where all inventions come from. Through imagination, people can envision what has not been seen before. Furthermore, it also allows people to empathize with others although they haven't experienced what others have already.

Success is not your life

The author wisely shared that success or any acquisition you've had in your life is not your life. Material achievements are not what really defines your life but rather, the happiness and fulfillment you have knowing you fulfilled what you've been called to do in life. 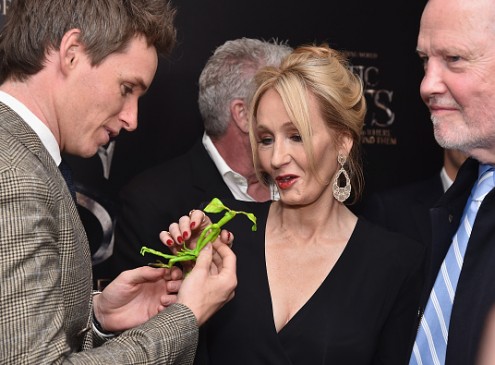