The demonstration occurred at a fundraiser event, outside the Honors College where Petraeus is appointed to teach a class on public policy.

According to the criminal complaint, about 75 people were protesting the four-star U.S. general's adjunct professorship because of his actions in Iraq/Afghanistan as war commander, and drone attacks on civilians and the setting up of torture centers and death squads as the CIA chief.

The demonstrators claimed that the protest was meant 'to let the administration know that war criminals cannot be hired.'

The Ad Hoc Committee against the Militarization of CUNY, the organizers behind the protest, said that the arrests by the New York City police were brutal.

"Students were punched, slammed against vehicles and against the pavement by police captains and officers, after the NYPD forced them off the pavement and into the street," a press release said.

"As students were chanting 'War Criminal Petraeus Out of CUNY Now,' I was shocked to see several police officers grab and brutalize one of the demonstrators," said City College student Yexenia Vanegas. "This was completely unprovoked, as demonstrators made clear that they were there to defend our university in a peaceful protest."

Luis Henriquez, 25, one of the six protesters arraigned in Manhattan Criminal Court, said that he was punched by cops. Henriquez has been charged with Obstruction of Governmental Administration (OGA), resisting arrest, harassment and disorderly conduct.

"I got beaten on my back," the Queens College student said. "I got kneed in my head while I was on the ground. My face (was) being pushed into the concrete."

Defending his clients, Attorney Lamas Deek said, "They did not touch or threaten those officers. The only obstruction that happened was from the police." 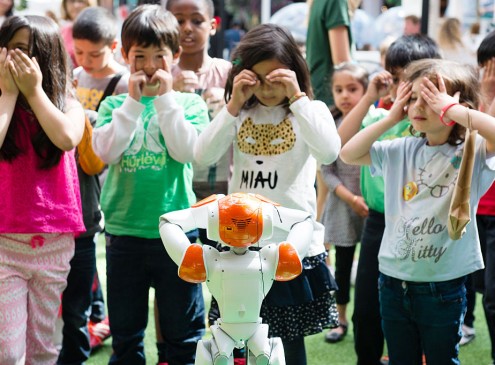 USC Annual Robotics Openhouse: Kids Get Their Hands On Robots; A Most Memorable Field Trip...