Why You Should Read Super Mentors: How A New Approach To Mentorship Became A ‘Cheat Code’ For Today’s Most Successful Twenty-Somethings

Eric Koester is one of the most popular professors at Georgetown and the 2020 National Entrepreneurship Professor of the Year, but he nearly quit teaching.

"I was having a really hard time helping my students get what they wanted," he shared. "And it was difficult working with ambitious people without a real way to help them achieve their goals. I felt pretty disillusioned."

Koester had a secret weapon: his mentor Steve Blank, a noted entrepreneur and one of the most influential minds in entrepreneurship.

"Steve transformed my life with a simple suggestion: Would I like to work on a project with him? I jumped at the chance, and that small project eventually connected me with dozens and dozens of amazing people, and numerous new opportunities. It ultimately changed my life. I wondered if maybe I could do the same for my students, but I had no idea the approach would become so transformative."

Koester noted that the difficult and challenging things his students wanted to do - working at prestigious companies, starting companies, creating books and podcasts, or getting hired in a field outside your major or specialty - required help from others. And that's why mentors are so attractive; they can help us achieve things. However, the idea of mentors hadn't really evolved much.

"Steve absolutely transformed my life but he never spoke about mentoring me and I'm not sure he'd even call me his mentee. We spoke about working on something together and that's when the lightbulb went off for me. If I wanted my students to develop relationships with amazing mentors, they needed a project. And that changed everything."

Koester's new book Super Mentors shares the framework behind his award-winning course. At the center of his philosophy is the idea that people need a project - something tangible and real - to attract others to you. 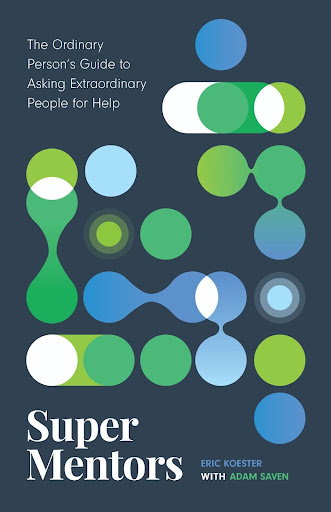 "Having the right project is like a magnet. All we had to do was design the right magnets for each person, and suddenly amazing things began to happen."

Koester's partner in the book, Adam Saven, has seen a radical change in mentorship during COVID. "COVID-19 didn't necessarily change the trajectory of higher education; it accelerated changes that were already happening - one of which is an increased focus on social capital. It's been exciting to see more and more institutions begin to really put strategies in place to make sure students leave school having built a network that will persist long after they graduate. It's something that's been long overdue."

Saven's company PeopleGrove provides a platform that enables millions of students, learners, and alumni to connect for casual mentoring relationships. What Saven and Koester realized is that the virtualization of relationships highlighted a trend that had been decades in the making.

"I see it time and time again with my own courses and students," Koester says. "You need something to connect about in order to build a meaningful relationship. And that's why it's so critical to empower people to create projects that allow for collaboration, especially when you're seeing more and more relationships start digitally or virtually."

Koester wanted to see if the findings in his book held true in the real world, so he studied more than 5,000 members of the elite Forbes 30 under 30, an annual recognition of the nation's brightest twenty-somethings since 2011. He'd assumed that the list would be filled with people who came from elite schools that regularly trumpeted the power of their networks. He was shocked to find that less than 20% of the list was made up of people from those elite schools.

What he found instead was over 80% of that list had leveraged a project to create their networks of casual mentors who helped them to succeed.

"I'd always assumed that the phase 'your network is your net worth' was true as far as today's most successful young people," Koester says. "But what the researched proves is that the most successful people are building their networks differently and more proactively. It's this idea of creating multiple, specific networks throughout your career tied to specific projects or problems that is happening. You need a project that will attract casual mentors to you, and that leads to these Super Mentors who can often transform your entire trajectory."

●  Law of the Right Person

●  Law of the Right Start

●  Law of the Right Time

Each of these pushes the reader to challenge their assumptions about mentors, even simple ideas like having multiple mentors and no longer calling people your mentor.

"We learned through our research and practice that there's this mythology to mentoring that has remained unchanged for centuries," Koester says. "Today is different and people who are succeeding in achieving their goals know it. They treat mentoring differently, and once we knew how, we realized it was something all of us could learn from. My students have been amazing examples of the results."

Super Mentors is filled with useful fact-finding and engagement exercises, an empathetic tone, and practical, sensible advice. This book will easily earn a place among the most impactful career-finding books. It is a book that will inspire millions of people to leap ahead in their lives and careers.